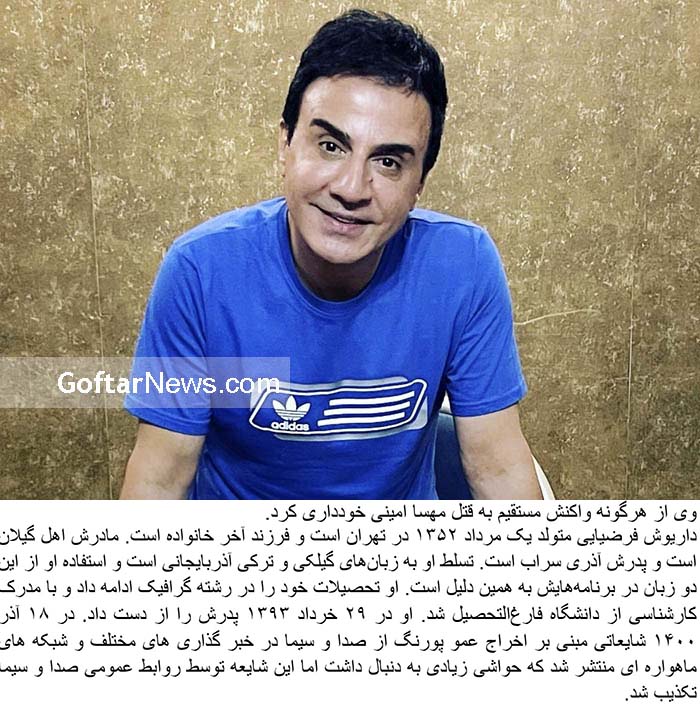 Dariush Fadziai, born on August 1, 1352 in Javadiyeh, is a presenter and program maker. He graduated with a bachelor’s degree in graphics, became famous by hosting a children’s program under the stage name Amo Pourang, and now he also makes programs. Since I was a child, I loved watching Indian movies. The feeling in Indian movies was unique in my opinion. I was very interested in acting, so after watching these movies, I played them for my brothers and sisters, and I was paid food like puffs. During my childhood, I was very imaginative. My imagination went so far that I found an imaginary friend and spent most of my time with this friend. As far as we can imagine, it worried my parents at some point, but when they saw that me and this imaginary friend were of no use to anyone, they stopped worrying. At the end of 1378, when he was 26 years old, Dariush Faziai was in a children’s collection called Turang and Porang. It entered the television frame, which was seen a lot. Then, in Ramadan 2013, he performed his own program called Amoop Varang, which became very successful and became famous. When the late Manouchehr Nowzari took the test from me, he told me that I could not succeed in the test and kicked me out of his room. I came back at the same time and said that I had something to say about my work, and it was not until 10 years later that he invited me to the hot seat program. I was his last guest on this show, where he said he liked my work. At the age of 20 and 21, before becoming famous, Dariush Fadziai proposed three times, but because of the difference in social rank, he got no answer all three times. It was in the three-star program with the performance of Ehsan Alikhani that Uncle Pourang was chosen by public vote as the third best performer of the year, along with Adel Ferdosipour and Rambad Javan. Ampoorang met him in 1996 through the Iranian doctor Shahrukh Khan, who said that he was a very good and great Indian actor. Sometimes my heart burns for the child I never had, and I say to myself that I may not be able to give as much time to my child as I gave to other children. But still, I think I will be a good father to my child because I really love children. I had a very good childhood, and by the way, everyone says that I was very different from my peers at that time. When they praise me, they say that I was very special. My essays, writings, clothes, etc. were special. Looking back and reviving memories is sweet for me. I love the world of children and I enjoy being with them, but this enjoyment does not mean that I do not have my own personal life. I have my own personal life off camera, and I can’t be expected to be full of energy at all times.

After the departure of the Dutch striker Jurgen Lokadia from the Persepolis team, the directors of this club thought of … END_OF_DOCUMENT_TOKEN_TO_BE_REPLACED

On this special cover, apart from Golshifteh Farahani and Zaramira Brahimi, ten other famous faces have supported  protesting women, and … END_OF_DOCUMENT_TOKEN_TO_BE_REPLACED

Rafaela Santos is the sister of one of the most prominent and famous footballers in the world, but apart from … END_OF_DOCUMENT_TOKEN_TO_BE_REPLACED

Anashid Hosseini was born on January 24, 1992 in Ahvaz. His family moved very soon, a year after his birth. … END_OF_DOCUMENT_TOKEN_TO_BE_REPLACED

Neda Agha-Soltan (23 January 1983 – 20 June 2009) was an Iranian student of philosophy, who was participating in the … END_OF_DOCUMENT_TOKEN_TO_BE_REPLACED