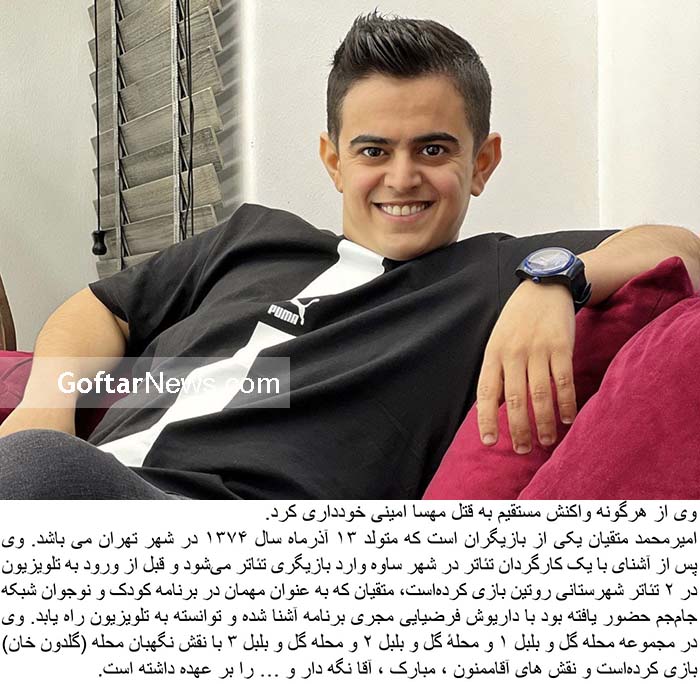 Amir Mohammad Mottagian, born on December 13, 1374, is a presenter and actor He is a bachelor’s student in the field of directing who started acting in theater until he became famous at the age of 10, alongside Amopoorang, and he also has singing experience. He is an only child. His mother is from Saveh and his father is from Tehran. He works in printing and designing paintings and textiles. They lived in this area until the third grade. In 1383, when he was 9 years old, he started acting with a theater director in Saveh and performed in two city theaters. In the summers, when I was unemployed, I used to go to the store with my father. One day, when he was out of the store, one of the directors of Saveh Theater came to order an advertising banner. I recorded the details of the job, and when I said goodbye, I said please don’t forget the deposit. This sentence made him like me. He smiled and said, “Are you the son of this gentleman who owns a shop here?” I said yes. In short, he paid a sum of money and left without saying anything, but it didn’t take long before he told my father about my participation in his theater. At that time, I was in the second grade of elementary school. Amir Mohammad, who appeared as a guest in the program for children and teenagers of the Jam Jam network in the summer of 2014, got to know the host of the program, Dariush Fadziai. At that program, Bulbul Bani came to his aid and became the assistant host of Amopurang at the invitation of the program staff. He loves cars and acting and has been on the stage since he was 8 years old. He has dreamt of kicking a soccer ball and riding a bicycle in the alley. The same days when he puts colorful smiles and laughter on the lips of his peers Amirmohammed has a pleasant voice and so far has sung more than 50 happy and children’s songs with Amopoorang in entertainment programs. As an independent singer, he was responsible for dozens of musical works in the religious genre alone My role model is Amopoorang. With his age and appearance, he makes himself the size of a child and utters very simple and childish words and jokes. In 2013, Amir Mohammad went to visit the supreme leader of the revolution in the hospital (due to prostate surgery) along with his uncle and a group of art residents. The interesting thing was that the leadership of the meeting 6 years ago remembered in detail that Amir Mohammad had said that Uncle Pourang found me from a lucky egg. During this meeting, Amir Mohammad said to the leader, “We were young and ignorant then! To your greatness, you forgive that sentence! The leader said with a laugh: “So you are old now! Which presenter and actor have you seen tell the media his salary? All I can say is that I am paid more than all child actors Of course, this amount may not be my right, but it is the grace of God and the intention of the producer.

After the departure of the Dutch striker Jurgen Lokadia from the Persepolis team, the directors of this club thought of … END_OF_DOCUMENT_TOKEN_TO_BE_REPLACED

On this special cover, apart from Golshifteh Farahani and Zaramira Brahimi, ten other famous faces have supported  protesting women, and … END_OF_DOCUMENT_TOKEN_TO_BE_REPLACED

Rafaela Santos is the sister of one of the most prominent and famous footballers in the world, but apart from … END_OF_DOCUMENT_TOKEN_TO_BE_REPLACED

Anashid Hosseini was born on January 24, 1992 in Ahvaz. His family moved very soon, a year after his birth. … END_OF_DOCUMENT_TOKEN_TO_BE_REPLACED

Neda Agha-Soltan (23 January 1983 – 20 June 2009) was an Iranian student of philosophy, who was participating in the … END_OF_DOCUMENT_TOKEN_TO_BE_REPLACED