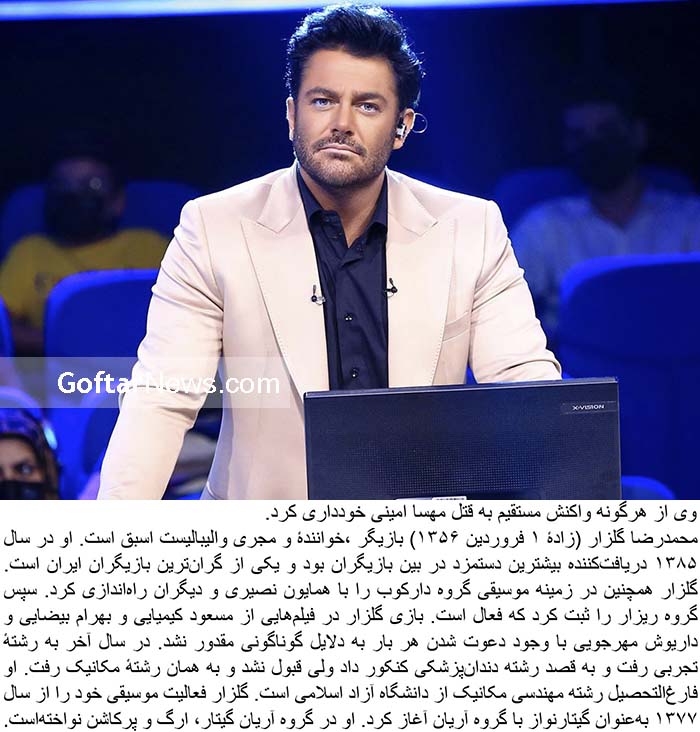 Mohammad Reza Golzar was born on April 1, 1356. He is an actor, singer, and composer. He graduated from Azad University with a bachelor’s degree in fluid mechanics engineering. He started playing the guitar when he was a student, and now he has several digital stores. With a height of 177 cm and a weight of 88 kg, he is also present in the modeling arena. Mohammadreza Golzar was born in the city to an engineer father from Tabriz and a mother from Tehran. He has two brothers, Alireza, a civil engineer, and Berdia, an English translator, and a sister, Atusa, a German translator, and she is the third child in the family. He started playing volleyball when he was in high school and was the best volleyball player in the province as a ball catcher in “Pars Khodro”, “Shesheh and Gas”, “Pas” and “Dihim” clubs. He was not only involved in volleyball but also skied professionally and has an alpine ski coaching card. He started music with his father’s opposition from the third grade of high school as a self-taught guitarist, then a piano player, until after university, he became a member of the Ariyan group as a musician. In April 1379, at the age of 23, he met director Iraj Qadri in a coffee shop in Khazar Shahr, went to their table and invited him to the first concert of the Arian group. In response, Iraj Qadri invited him to play in the movie “Narges and Sam”, and thus Golzar got his first acting experience a few months later after the test and pre-production. Since 1386, Aho Spanelo has been in charge of selecting and designing Reza Golzar’s clothes for various events as an exclusive stylist. Mrs. Spanello is a fashion and clothing graduate from the University of England and applies the latest design methods to Golzar’s clothes. In all these years, I have felt how much fame has made me lonely. Despite all the rumors, I am still single and have not gotten married. Receiving one billion tomans for five months of acting in the romantic series of 1996, on average 200 million tomans He has been at the top of the most expensive actors for several years.

Mahlagha Jaberi attends the Opening Night Gala screening of “What’s Love Got To Do With It?” at the Red Sea … END_OF_DOCUMENT_TOKEN_TO_BE_REPLACED

Shiva Balochi, the actress in the series Nurses, wrote: As the smallest member of the Muslim community, the hijab has … END_OF_DOCUMENT_TOKEN_TO_BE_REPLACED

Shohreh Mousavi, one of the directors of the Badran Company, who defrauded over 9,000 billion tomans from 300,000 people by … END_OF_DOCUMENT_TOKEN_TO_BE_REPLACED

“Evil and passion work with him.” Open the heart valves. “Its night song can be heard all over the world.” … END_OF_DOCUMENT_TOKEN_TO_BE_REPLACED