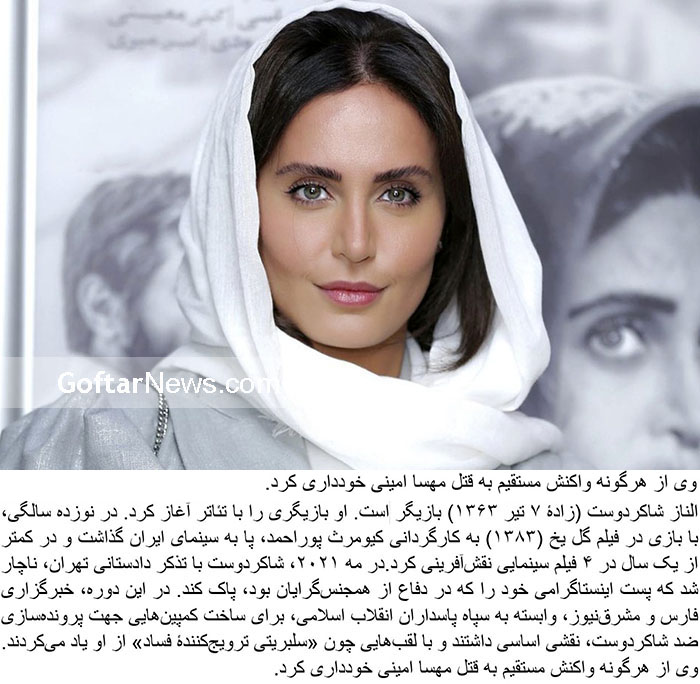 Elnaz Shakerdoost (born July 7, 1363) is an actress. He started acting in theater. At the age of nineteen, he entered the cinema by acting in the movie Gol Yeh (2013) directed by Kyomarth Pourahmad and acted in four movies in less than a year. According to a report in 2019, “Shakerdoost is one of the main options for playing serious roles in cinema”. Alnaz Shakerdoost wrote in a letter to the media: “I actually lived the role of Afsanah and my soul will remain in this role forever. My only happiness is the timely awakening of the souls of my country, Iran. The reason why Elnaz Shakerdoost played this role was to hear the sigh of the same girl who got angry with God after the price of bread became more expensive and left the line and got on the bus of prostitution, and no one asked what would be the answer to the house without bread… after the news of the murder of Ali Fazli Monfared On May 14, 1400, he supported homosexuals on his Instagram page. Under a photo of himself with six-colored bangs, which is a symbol of LGBT, Shakerdoost wrote: “Since I was a child, every story I read started with the name of a merciful God, but this story does not have a merciful God. Maybe it was involved in all the massacres that are reported in the media around the world these days. We see, the story of misogyny and LGBT is not a new narrative in our society. It has become so rooted that today it has become a big problem and has taken our breath away. It has brought us to the point where we demand the right to take the life that we have not given, in every corner. In this land, men and women are beheaded by their families and loved ones for the smallest human rights. The right to choose, the right to have taste, the right to make life decisions. Being killed by your childhood friends, father, mother, and loved ones is like dying a thousand times. Today we have to stand tall to remove this black cloud from our heads. Today we will no longer be silent. ” In May 2021, Shakerdoost was forced to delete his Instagram post, which was in defense of homosexuals, with the notice of the Tehran Prosecutor’s Office. During this period, Fars News Agency and Mashrekh News, affiliated with the Islamic Revolutionary Guard Corps, played a key role in building campaigns to file a case against Shakardoost and referred to him with nicknames such as “celebrity promoting corruption.” Reacting to Kimia Alizadeh’s victory over Nahid Kiyani, Elnaz Shakerdoost wrote in her Instagram story: “Where did we get to when a girl who once brought a medal for this land should now fight against the flag of this country as a refugee team? And it’s good that you won! My dear, you will always be the alchemy of this earth.

After the departure of the Dutch striker Jurgen Lokadia from the Persepolis team, the directors of this club thought of … END_OF_DOCUMENT_TOKEN_TO_BE_REPLACED

On this special cover, apart from Golshifteh Farahani and Zaramira Brahimi, ten other famous faces have supported  protesting women, and … END_OF_DOCUMENT_TOKEN_TO_BE_REPLACED

Rafaela Santos is the sister of one of the most prominent and famous footballers in the world, but apart from … END_OF_DOCUMENT_TOKEN_TO_BE_REPLACED

Anashid Hosseini was born on January 24, 1992 in Ahvaz. His family moved very soon, a year after his birth. … END_OF_DOCUMENT_TOKEN_TO_BE_REPLACED

Neda Agha-Soltan (23 January 1983 – 20 June 2009) was an Iranian student of philosophy, who was participating in the … END_OF_DOCUMENT_TOKEN_TO_BE_REPLACED