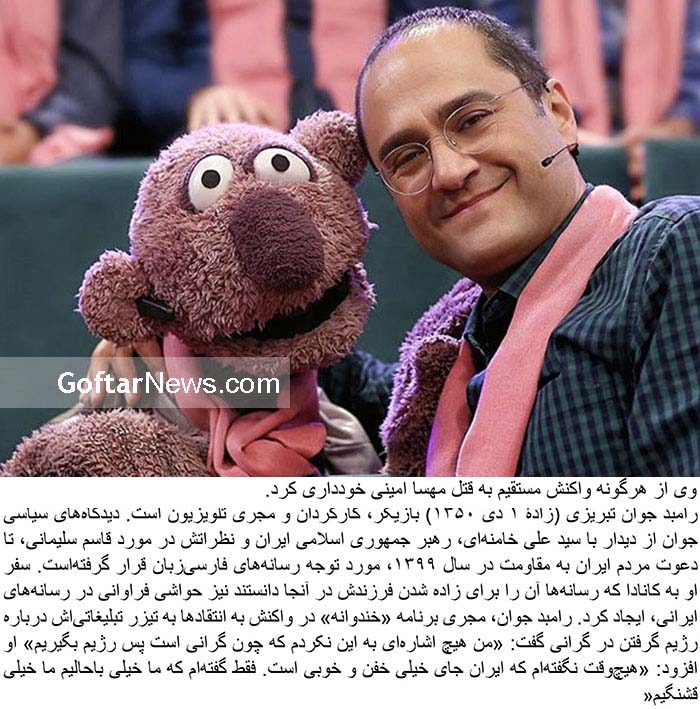 Rambad Javan is a famous actor, writer, and director in our country. Rambad Javan has had significant success in the implementation and creation of the program. He has made people happy for many years by creating and performing funny programs. Young Rambad has been married three times so far, and his current wife is Mrs. Negar Javaherian, with whom they have one child. Recently, there have been rumors about the birth of his third child, which is due to the publication of this photo of his wife. Rambad, who was born on January 1, 1350 in the Shahrarai neighborhood, is a theater, cinema, and television actor, director, and TV presenter. Young Rambad was born into a traditional family in Tehran of Azeri origin. Young Rambad has a sister named Popek who is 8 years older than him. Rambad means the angel of peace and tranquility, and this name was chosen by his sister. He is not very interested in football, and he likes music a lot, but he prefers not to name any particular singer. Rambad’s close friend is Ashkan Khatibi. Young Rambad marries Mandana Ruhi in the seventies. His wife is an artist like him, and, of course, the noise of their marriage does not reach the people around them. The interesting thing about Rambad Javan’s first marriage is that Seyyed Mohammad Khatami, the president of Iran at the time, sat them at the wedding table and delivered the sermon for them. However, only a few years later, this marriage reached a dead end and the two separated. A few years later, at the age of 36, he thinks about marriage again. This time, his wife is Sahar Dolatshahi, whose acquaintance story goes back to the theater stage. These two played with each other in the passenger series. The story of the acquaintance of Rambad and Sahar also started with a theater play. Sahar Dolatshahi was a member of the Pesiani theater group, and Attila Pesiani had a colorful role in this acquaintance. Young Rambad gave his wife a motorcycle on the occasion of Women’s Day last year! There are unconfirmed rumors about the lives of these two, which indicate that they have recently separated from each other. The rumor that we hear these days in private circles and cyberspace is that Rambad Javan and Negar Javaherian did not agree to live together. Some consider the decline of the new series of the funny program to be because of this issue, and some blame his lack of cheerfulness and previous energy for this reason. In short, Rambad’s previous separation from Sahar Dolatshahi caused a lot of controversy, and even Rambad reacted sharply in an interview and said, “I prefer it as a resistance behavior against this kind of excitement to know my personal life. I would like to declare in front of everyone that I don’t like to talk about my private life in the national media. If I wanted to talk, I would live on the street instead of at home. I don’t like anyone asking me about my private life. My life is mine.

Mahlagha Jaberi attends the Opening Night Gala screening of “What’s Love Got To Do With It?” at the Red Sea … END_OF_DOCUMENT_TOKEN_TO_BE_REPLACED

Shiva Balochi, the actress in the series Nurses, wrote: As the smallest member of the Muslim community, the hijab has … END_OF_DOCUMENT_TOKEN_TO_BE_REPLACED

Shohreh Mousavi, one of the directors of the Badran Company, who defrauded over 9,000 billion tomans from 300,000 people by … END_OF_DOCUMENT_TOKEN_TO_BE_REPLACED

“Evil and passion work with him.” Open the heart valves. “Its night song can be heard all over the world.” … END_OF_DOCUMENT_TOKEN_TO_BE_REPLACED