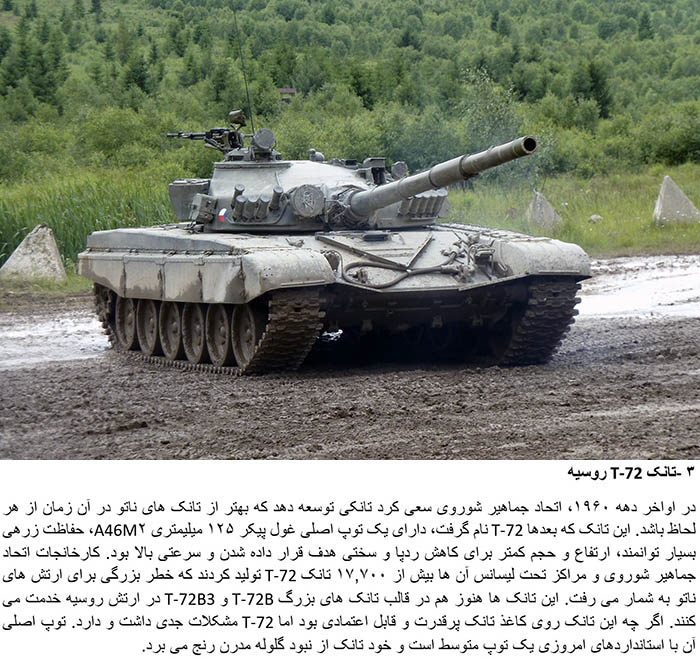 In the late 1960s, the Soviet Union sought to develop a tank that would be superior to existing NATO tanks in every way. The tank, later known as the T-72, would mount the powerful 125-millimeter 2A46M main gun, incorporate superior armored protection, have a low profile, and prowl the battlefield at high speeds. Soviet factories and licensees churned out 17,700 T-72s, and the tank was a major threat to the armies of NATO. These tanks still serve today in the Russian Army as the T-72B and T-72B3 main battle tanks. Although a powerful tank on paper, the T-72 has serious problems. The main gun is mediocre by today’s standards, and the tank suffers from a lack of modern ammunition. The T-72’s low profile, while useful in avoiding detection, means the main gun cannot be elevated to engage enemies in multi-story buildings. Tanks such as the T-72B and -B3 have not received major armor upgrades, instead settling for the addition of blocks of reactive armor. Even today, most of the Russian Army’s T-72 tanks lack third-generation night vision sighting systems.

Mahlagha Jaberi attends the Opening Night Gala screening of “What’s Love Got To Do With It?” at the Red Sea … END_OF_DOCUMENT_TOKEN_TO_BE_REPLACED

Shiva Balochi, the actress in the series Nurses, wrote: As the smallest member of the Muslim community, the hijab has … END_OF_DOCUMENT_TOKEN_TO_BE_REPLACED

Shohreh Mousavi, one of the directors of the Badran Company, who defrauded over 9,000 billion tomans from 300,000 people by … END_OF_DOCUMENT_TOKEN_TO_BE_REPLACED

“Evil and passion work with him.” Open the heart valves. “Its night song can be heard all over the world.” … END_OF_DOCUMENT_TOKEN_TO_BE_REPLACED