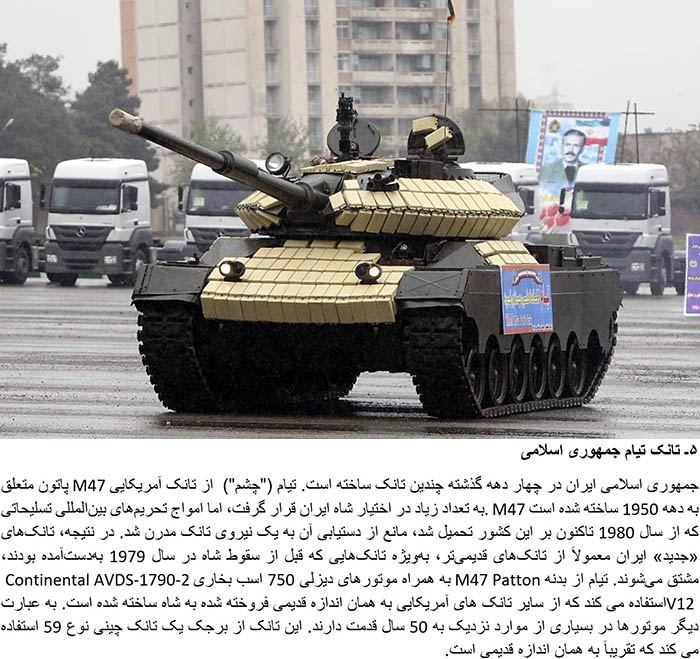 The most dubious of these tanks is the Tiam (“Eyes”) tank. The Tiam is developed from the 1950s-era American M47 Patton tank. The M47 was supplied in large numbers to the Shah of Iran, but waves of international arms embargoes slapped on the country from 1980 to present have prevented it from acquiring a modern tank force. As a result, Iran’s “new” tanks are typically derived from older tanks, especially those acquired before the fall of the Shah in 1979. Tiam uses the hull of the M47 Patton paired with 750-horsepower Continental AVDS-1790-2 V12 diesel engines drawn from other, equally old American tanks sold to the Shah. In other words, the engines are nearly 50 years old in many cases. The tank uses the turret of a Chinese Type-59 tank that is nearly as old, though Tiam turrets have been spotted with additional steel armor and explosive reactive armor. Despite the improvements, Tiam’s armor will be no match for the high-velocity anti-tank rounds of modern Western tanks, including the American M1 Abrams and German Leopard 2.

Mahlagha Jaberi attends the Opening Night Gala screening of “What’s Love Got To Do With It?” at the Red Sea … END_OF_DOCUMENT_TOKEN_TO_BE_REPLACED

Shiva Balochi, the actress in the series Nurses, wrote: As the smallest member of the Muslim community, the hijab has … END_OF_DOCUMENT_TOKEN_TO_BE_REPLACED

Shohreh Mousavi, one of the directors of the Badran Company, who defrauded over 9,000 billion tomans from 300,000 people by … END_OF_DOCUMENT_TOKEN_TO_BE_REPLACED

“Evil and passion work with him.” Open the heart valves. “Its night song can be heard all over the world.” … END_OF_DOCUMENT_TOKEN_TO_BE_REPLACED