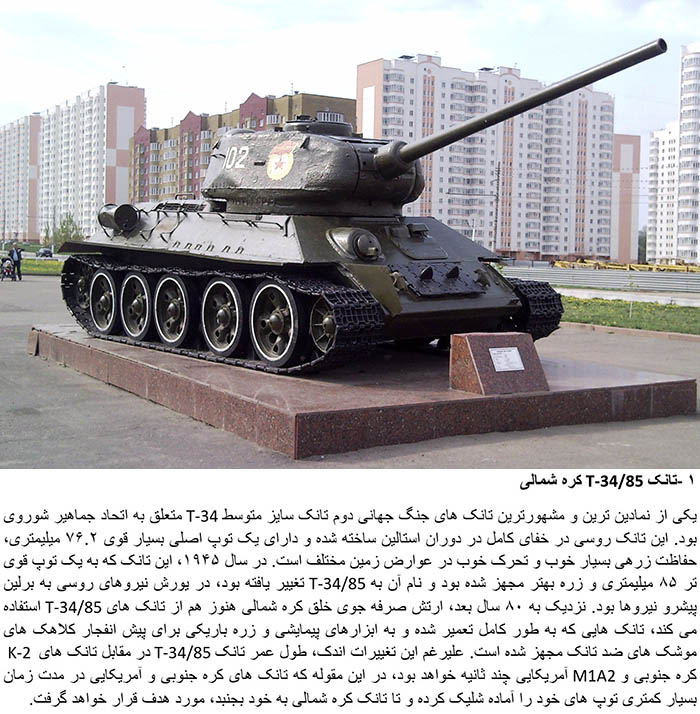 One of the most iconic tanks of the Second World War was the Soviet T-34 medium tank. The T-34, conceived in great secrecy in Stalinist Russia, featured a powerful 76.2-millimeter main gun, good armor protection, and good cross-country mobility. By 1945, the tank— armed with a heavier 85-millimeter gun and improved armor, now dubbed the T-34/85—was spearheading the Russian Army’s drive on Berlin. Nearly 80 years later, the North Korean People’s Army’s thrifty reserve forces still operate T-34/85 tanks. They’ve been overhauled and fitted with new running gear and slat armor designed to pre-detonate the warheads of anti-tank missiles. Despite these modest improvements, the lifetime of a T-34/85 in a match against South Korean K-2 tanks and American M1A2 tanks would be measured in seconds, depending on how long it took its adversaries to load their guns.

After the departure of the Dutch striker Jurgen Lokadia from the Persepolis team, the directors of this club thought of … END_OF_DOCUMENT_TOKEN_TO_BE_REPLACED

On this special cover, apart from Golshifteh Farahani and Zaramira Brahimi, ten other famous faces have supported  protesting women, and … END_OF_DOCUMENT_TOKEN_TO_BE_REPLACED

Rafaela Santos is the sister of one of the most prominent and famous footballers in the world, but apart from … END_OF_DOCUMENT_TOKEN_TO_BE_REPLACED

Anashid Hosseini was born on January 24, 1992 in Ahvaz. His family moved very soon, a year after his birth. … END_OF_DOCUMENT_TOKEN_TO_BE_REPLACED

Neda Agha-Soltan (23 January 1983 – 20 June 2009) was an Iranian student of philosophy, who was participating in the … END_OF_DOCUMENT_TOKEN_TO_BE_REPLACED