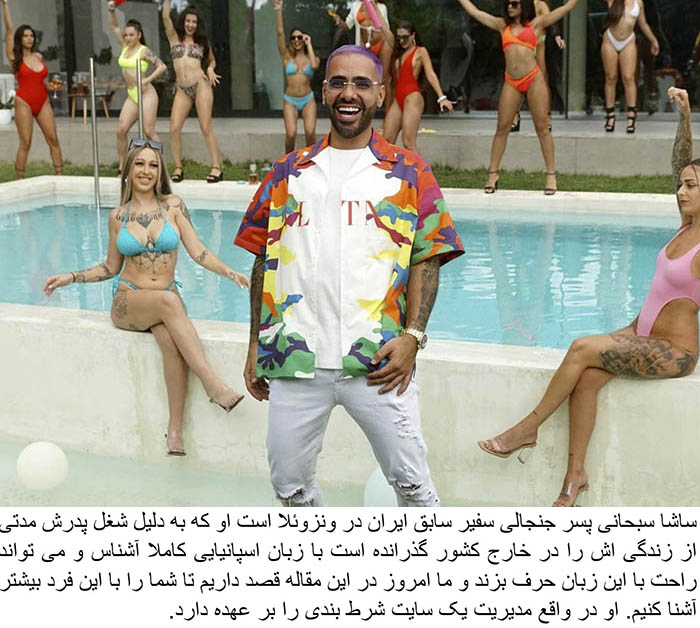 Sasha Sobhani, a 33-year-old musician, appeared in court in Madrid after accused him of running illegal gambling websites and money-laundering. He denied the charges and warned he was at risk of torture if he was sent back. Ahmad Sobhani (born 1961) is a retired diplomat who previously served as Iran’s ambassador to Venezuela (2001–06) and Gabon (1995–98), in addition to chargé d’affaires in Armenia (1992–94). He also served as the deputy foreign minister for European and American Affairs under Manouchehr Mottaki (2007–10).

Siamak Dehghanpour has been an international broadcaster at VOA’s Persian service since 2003. Dehghanpour played a key role in the … END_OF_DOCUMENT_TOKEN_TO_BE_REPLACED

Mehran Modiri (born 7 April 1967) is a film director, film producer, actor, and singer. He is considered to be … END_OF_DOCUMENT_TOKEN_TO_BE_REPLACED

She was born in Piacenza to the policeman Mario Salemi and the Iranian beautician Fariba Tehrani, who separated in 2009. … END_OF_DOCUMENT_TOKEN_TO_BE_REPLACED

Hannaneh Shahshahani was born into theater! Her Mother’s was an actress and film director and her father was a writer … END_OF_DOCUMENT_TOKEN_TO_BE_REPLACED