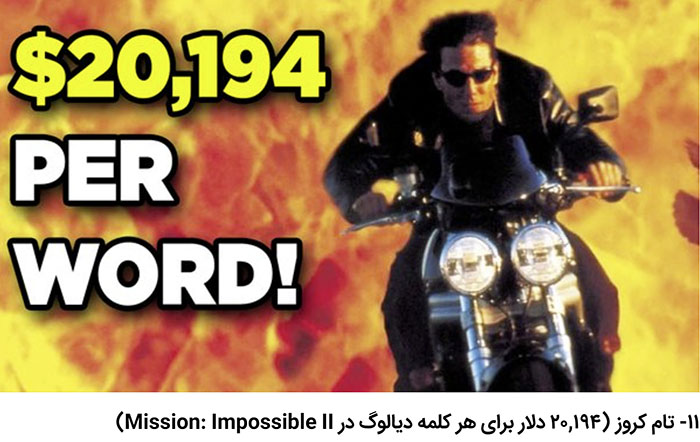 Across the six films to date, Cruise has tended to have a standard upfront fee of somewhere between $12 million – $30 million, yet additional fees and box office percentages have seen the actor make nearly $300 million combined across those six pictures. One of the most financially beneficial of the Mission: Impossible films for Cruise was 2000’s Mission: Impossible II. By the time the dust settled, the actor is believed to have pocketed an eye-watering $75 million from that sequel. In a film that had Cruise speak a grand total of 3,714 words, that breaks down to a hearty $20,194 per word for the franchise star’s second outing as Ethan Hunt. With the hefty box office hauls that the Mission: Impossible franchise brings in, it makes absolute sense for Paramount to already be at work on a seventh and eighth installment in the series. Likewise, with such major paydays – largely made up from back-end earnings – it’s easy to see why Tom Cruise is always happy to get back in the Ethan Hunt saddle.

After the departure of the Dutch striker Jurgen Lokadia from the Persepolis team, the directors of this club thought of … END_OF_DOCUMENT_TOKEN_TO_BE_REPLACED

On this special cover, apart from Golshifteh Farahani and Zaramira Brahimi, ten other famous faces have supported  protesting women, and … END_OF_DOCUMENT_TOKEN_TO_BE_REPLACED

Rafaela Santos is the sister of one of the most prominent and famous footballers in the world, but apart from … END_OF_DOCUMENT_TOKEN_TO_BE_REPLACED

Anashid Hosseini was born on January 24, 1992 in Ahvaz. His family moved very soon, a year after his birth. … END_OF_DOCUMENT_TOKEN_TO_BE_REPLACED

Neda Agha-Soltan (23 January 1983 – 20 June 2009) was an Iranian student of philosophy, who was participating in the … END_OF_DOCUMENT_TOKEN_TO_BE_REPLACED