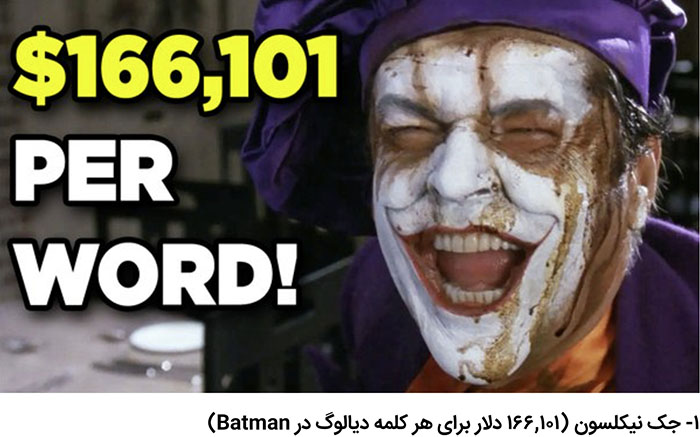 At the time of its release back in 1989, Tim Burton’s picture was largely marketed on its Clown Prince of Crime rather than its Dark Knight. After all, this was a time when many were left baffled by the casting of Mr. Mom as the iconic Batman. Of course, Michael Keaton turned out to be a phenomenal Caped Crusader, yet Warner Bros. opted to sell the movie based on its ‘big bad’ – and in doing that, they went all out to get Jack Nicholson on board as their centrepiece villain. Up front, Nicholson took home a cool $6 million for his turn in Batman. But what the veteran actor’s ace in the hole was, was in how he negotiated a backend deal that saw him receive somewhere in the region of an extra $90 million by the time all was said and done. Throughout Batman, Jack spouted just 585 words of dialogue. For Warner Bros., that worked out as them paying the iconic Nicholson a mammoth $166,101 for each and every single word for his time as the Jester of the Genocide.

Mahlagha Jaberi attends the Opening Night Gala screening of “What’s Love Got To Do With It?” at the Red Sea … END_OF_DOCUMENT_TOKEN_TO_BE_REPLACED

Shiva Balochi, the actress in the series Nurses, wrote: As the smallest member of the Muslim community, the hijab has … END_OF_DOCUMENT_TOKEN_TO_BE_REPLACED

Shohreh Mousavi, one of the directors of the Badran Company, who defrauded over 9,000 billion tomans from 300,000 people by … END_OF_DOCUMENT_TOKEN_TO_BE_REPLACED

“Evil and passion work with him.” Open the heart valves. “Its night song can be heard all over the world.” … END_OF_DOCUMENT_TOKEN_TO_BE_REPLACED