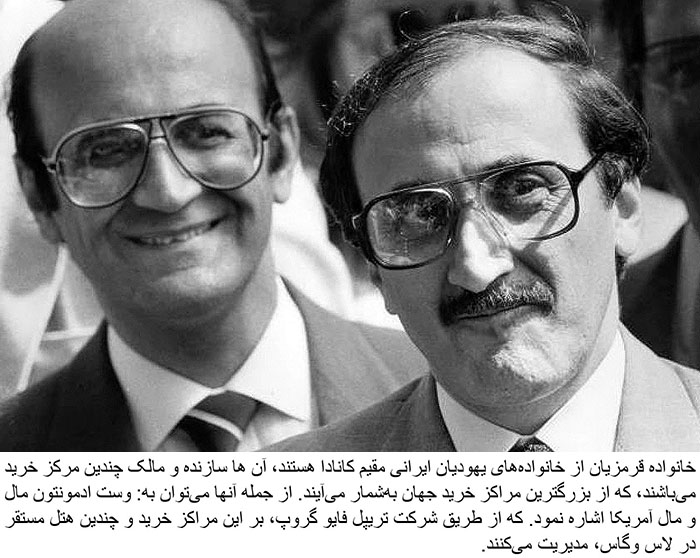 Jacob Ghermezian (1902-2000) was born to a religious Jewish family in Azerbaijan, and grew up in Iran. He started a business selling Persian rugs when he was just 17 years old. Within two decades, Ghermezian became one of wealthiest businessmen. In 1943, he hosted Roosevelt, Churchill, and Stalin in his apartment during the critical “Tehran Conference” where the three world leaders discussed the final stages of World War II and planned their path to victory. Unfortunately, the religious, and political situation in  worsened in the 1950s, so the Ghermezian family emigrated to America. After a short stay in New York, they settled in Montreal. Soon after, Ghermezian and his four sons (Eskandar, Nader, Raphael, and Bahman) discovered the inexpensive, pre-oil boom Edmonton real estate market, and heavily invested in it.

Mahlagha Jaberi attends the Opening Night Gala screening of “What’s Love Got To Do With It?” at the Red Sea … END_OF_DOCUMENT_TOKEN_TO_BE_REPLACED

Shiva Balochi, the actress in the series Nurses, wrote: As the smallest member of the Muslim community, the hijab has … END_OF_DOCUMENT_TOKEN_TO_BE_REPLACED

Shohreh Mousavi, one of the directors of the Badran Company, who defrauded over 9,000 billion tomans from 300,000 people by … END_OF_DOCUMENT_TOKEN_TO_BE_REPLACED

“Evil and passion work with him.” Open the heart valves. “Its night song can be heard all over the world.” … END_OF_DOCUMENT_TOKEN_TO_BE_REPLACED