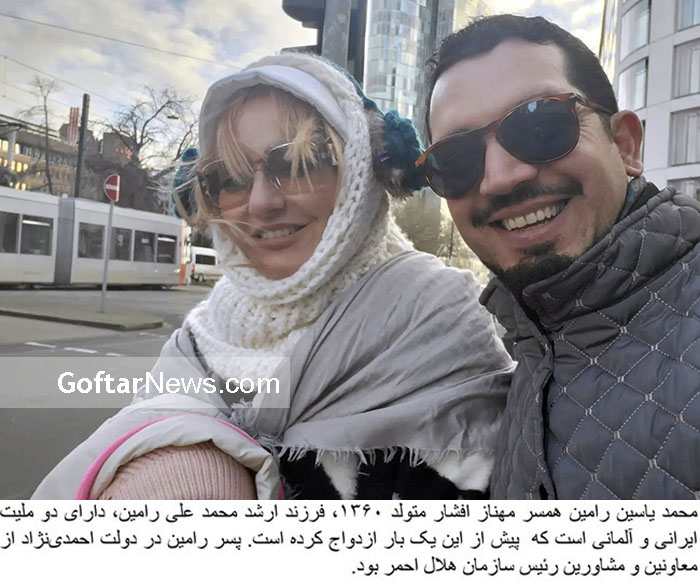 Mohammad Yasin Ramin (born 1360) is a former Rushd Pharmaceutical Center manager who is accused in one of Iran’s most notorious cases of financial corruption. Yasin was the son of Mohammad Ali Ramin, the press advisor of Ahmadinejad and the ex-wife of actress Mahnaz Afshar. Yasin Ramin was arrested in August of 1995 on a complaint from the Red Crescent Society and was released on bail in March of the same year. He has been accused of receiving two million euros from the Red Crescent Society for the import of medicine and medical equipment, but he did not hand over this amount to the seller. Ramin was sentenced to 17 years of imprisonment in the primary court, of which 7 years are enforceable. Yasin Ramin was acquitted after the change of the government and the judge of the case in November 1400. Yasin Ramin has been accused in the media of importing and distributing contaminated powdered milk. However, he and his wife, Mahnaz Afshar, denied this accusation, and the Red Crescent Medical Supply Organization has also announced that there is a case regarding spoiled milk powder.

After the departure of the Dutch striker Jurgen Lokadia from the Persepolis team, the directors of this club thought of … END_OF_DOCUMENT_TOKEN_TO_BE_REPLACED

On this special cover, apart from Golshifteh Farahani and Zaramira Brahimi, ten other famous faces have supported  protesting women, and … END_OF_DOCUMENT_TOKEN_TO_BE_REPLACED

Rafaela Santos is the sister of one of the most prominent and famous footballers in the world, but apart from … END_OF_DOCUMENT_TOKEN_TO_BE_REPLACED

Anashid Hosseini was born on January 24, 1992 in Ahvaz. His family moved very soon, a year after his birth. … END_OF_DOCUMENT_TOKEN_TO_BE_REPLACED

Neda Agha-Soltan (23 January 1983 – 20 June 2009) was an Iranian student of philosophy, who was participating in the … END_OF_DOCUMENT_TOKEN_TO_BE_REPLACED