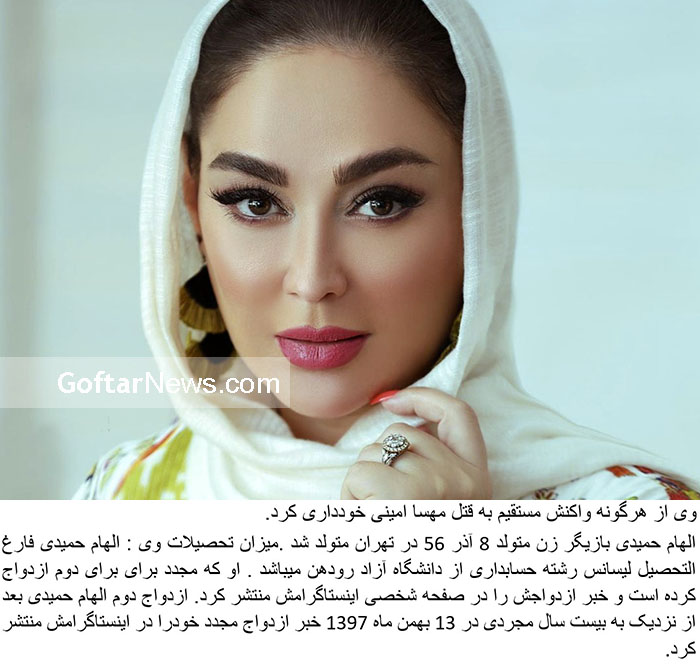 Elham Hamidi, a famous actress, was born on December 8, 1956. Her education level: Elham Hamidi graduated with a bachelor’s degree in accounting from Azad University in Roudhen. He is married for the second time and published the news of his marriage on his personal Instagram page. Apart from acting, Elham Hamidi used to dress for a maison and was busy doing this along with acting. The famous actor Elham Hamidi got married for the first time in 1976 at the age of 20, before starting acting and becoming famous, but this marriage did not last long and soon ended in divorce. Elham Hamidi’s second marriage, after nearly twenty years of celibacy, took place on February 13, 2017. He published the news of his remarriage on his Instagram. He did not give information about his wife, Elham Hamidi, published this text in his marriage news. Elham Hamidi’s father was a theater actor in his youth, and his father’s uncle was also a radio announcer, and this artistic talent was somehow inherited in the family of Elham Hamidi. This is the motivation. Elham Hamidi experienced acting at the age of seven. In the same Abanda, at the age of seven, I received my first acting award in the region, and I experienced several acting classes from the first elementary school until he dropped out and returned twice with acting classes, in 1379, when he was twenty-three years old, from the same acting classes. He was introduced to the satirical series “Miracle of Marriage,” directed by Alireza Khamse, and appeared in front of the camera for the first time. He began acting in the cinema in 1380 with the movie Duniya, but his fame began with the popular series Traveler from India, directed by Qasim Jafari in 1382; in 1383, he won the golden statuette for best supporting actor for his role in the movie Too Far Too Near. got cinema Elham Hamidi’s beautiful and attractive performance in the series Under the Razor in 1385 and his memorable role in the series Yousef Prophet as the wife of Yuzrasif in 1387 made him more popular than before. At the time when I decided to start working as a tailor, as soon as I arrived, the dollar reached 3 times its price. With this increase in the price of the dollar, I suffered financial loss and fatigue. It is bad luck. I consider grooming and self-care to be part of my daily life. I don’t care if my clothes aren’t even expensive, but it is important to wear special and appropriate clothes. A beautiful and orderly face is an actor’s capital, and it doesn’t matter to men or women, so efforts must be made to preserve this capital. I am against beauty procedures because I like a natural face, but I do do care work and use creams and lotions to keep my skin fresh and moist.

Mahlagha Jaberi attends the Opening Night Gala screening of “What’s Love Got To Do With It?” at the Red Sea … END_OF_DOCUMENT_TOKEN_TO_BE_REPLACED

Shiva Balochi, the actress in the series Nurses, wrote: As the smallest member of the Muslim community, the hijab has … END_OF_DOCUMENT_TOKEN_TO_BE_REPLACED

Shohreh Mousavi, one of the directors of the Badran Company, who defrauded over 9,000 billion tomans from 300,000 people by … END_OF_DOCUMENT_TOKEN_TO_BE_REPLACED

“Evil and passion work with him.” Open the heart valves. “Its night song can be heard all over the world.” … END_OF_DOCUMENT_TOKEN_TO_BE_REPLACED