The Fashion Designer Anna Pahlavi in the pictures 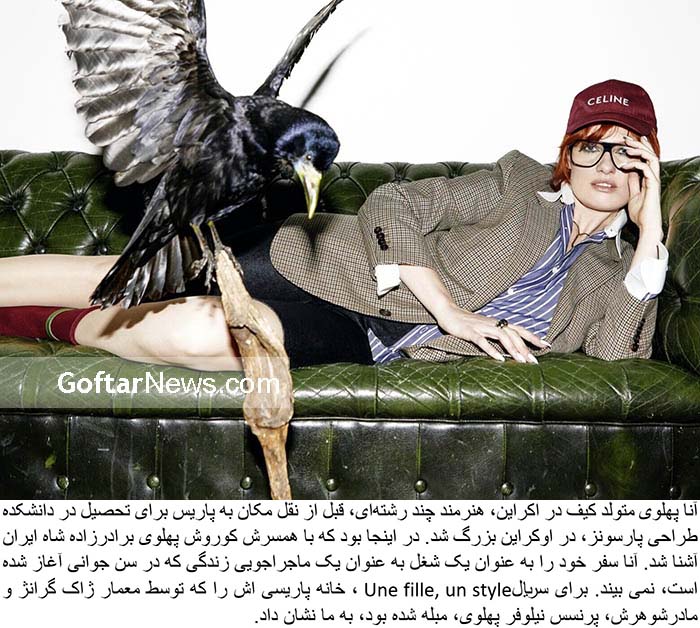 Born and raised in Kiev Ukraine, Anna Pahlavi started an international modeling career with Ford Models and studied at the Parsons School of design. She is also a member of the Persian Royal family from her wedding in 2005 with Prince Cyrus Pahlavi’s grandson of Princess Ashraf, twin sister of the Shah. The multidisciplinary artist, Anna Pahlavi, grew up in Ukraine before moving to Paris to study at Parsons School of Design. It was here that she met her husband, Cyrus Pahlavi, the great-nephew of the Shah of Iran. Anna doesn’t see her journey as a career so much as a life adventure, which began at a young age. For the series Une fille, un style, she showed us around her Parisian house, which was furnished by the architect Jacques Grange and her mother-in-law, Princess Niloufar Pahlavi. Inside? A beautiful mix of influences, including treasures brought back from her travels and works of art made by her family, such as a series of pomegranates, which are a symbol of fertility and immortality. The princess is also a a fashion enthusiast and collects exceptional pieces. At the top of her list is an Indian pink Dior dress in silk brocade and feathers, created by Marc Bohan for the Tehran collection in 1962. We dive into her fashion, art and architecture influences with a home visit.

Shiva Balochi, the actress in the series Nurses, wrote: As the smallest member of the Muslim community, the hijab has … END_OF_DOCUMENT_TOKEN_TO_BE_REPLACED

Shohreh Mousavi, one of the directors of the Badran Company, who defrauded over 9,000 billion tomans from 300,000 people by … END_OF_DOCUMENT_TOKEN_TO_BE_REPLACED

“Evil and passion work with him.” Open the heart valves. “Its night song can be heard all over the world.” … END_OF_DOCUMENT_TOKEN_TO_BE_REPLACED

The old actress Shaheen has died.Mahintaj Moghul Kayser, known as Shaheen, a cinematic actor and an old singer, has passed … END_OF_DOCUMENT_TOKEN_TO_BE_REPLACED