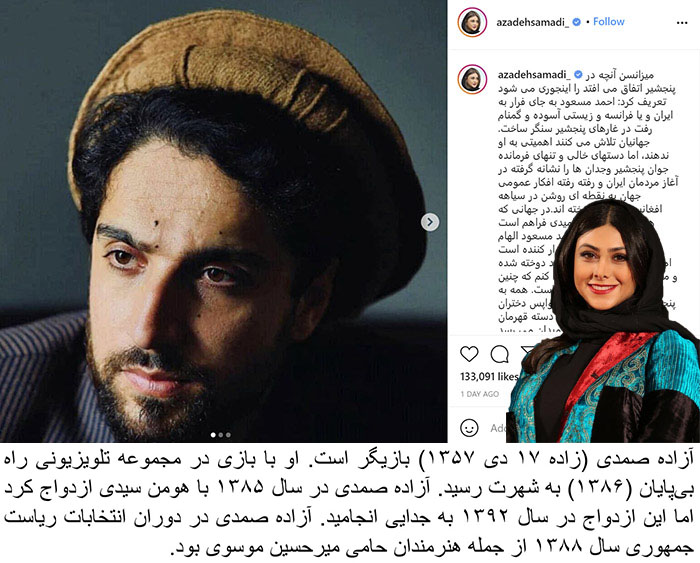 Azadeh Samadi was born on September 8, 1979 in Lahijan. After completing her undergraduate theater studies at Sura University, she completed a course of acting classes (supervised by Parviz Parastooi). She played in the theater production “Behir and Sugar”, and after some time was chosen to play in the TV series “The Endless Way” directed by Homayoun Asadiyan. She has performed in the short films “35 meter water level” and “blue teeth”, directed by Hooman Seyyed as well as “No One Talking to Anyone”. Azadeh Samadi married Houman Seyyedi in 2006. But this marriage ended in divorce in 2013. Azadeh Samadi was one of the artists supporting Mir Hossein Mousavi during the 2009 presidential election. Samadi hosted the Zabiwaka program, which was broadcast on the Iowa Internet network for the 2018 World Cup in Russia.[6] And Behrang Alavi, as his replacement, took over the implementation of this program.

After the departure of the Dutch striker Jurgen Lokadia from the Persepolis team, the directors of this club thought of … END_OF_DOCUMENT_TOKEN_TO_BE_REPLACED

On this special cover, apart from Golshifteh Farahani and Zaramira Brahimi, ten other famous faces have supported  protesting women, and … END_OF_DOCUMENT_TOKEN_TO_BE_REPLACED

Rafaela Santos is the sister of one of the most prominent and famous footballers in the world, but apart from … END_OF_DOCUMENT_TOKEN_TO_BE_REPLACED

Anashid Hosseini was born on January 24, 1992 in Ahvaz. His family moved very soon, a year after his birth. … END_OF_DOCUMENT_TOKEN_TO_BE_REPLACED

Neda Agha-Soltan (23 January 1983 – 20 June 2009) was an Iranian student of philosophy, who was participating in the … END_OF_DOCUMENT_TOKEN_TO_BE_REPLACED