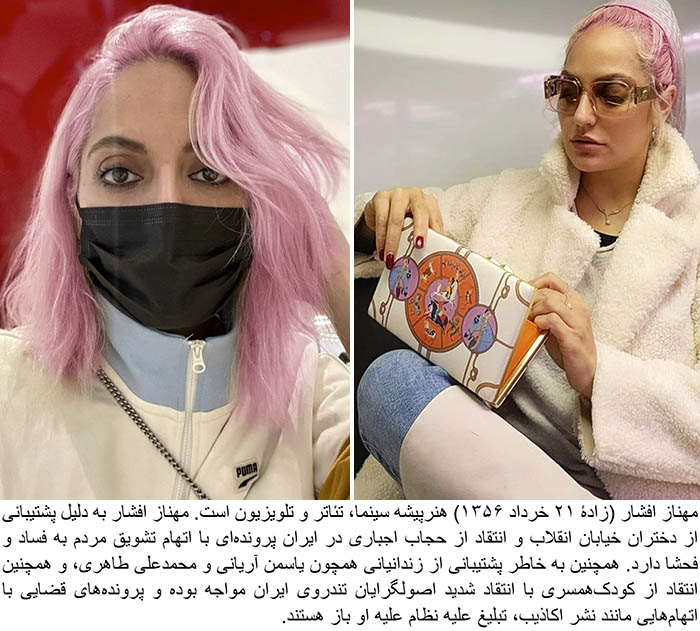 Mahnaz Afshar (born 10 June 1977) is an actress. She gained wide recognition in the record-breaking film Cease Fire. She graduated in natural science in high school. After graduation, one of her relatives who was the Theater Affairs Assistant in “Soureh” college introduced her to “Hannaneh” Art institute. Having studied video editions in the following years, she participated in the assembly job of “Ketāb-e Avval as a Golddigger” training materials, directed by Dariush Mehrjui. Later on, she was invited by Shamsi Fazlollahi to act in a TV series called Gomshodeh (Lost) directed by Masoud Navaii, making her first official play in the TV industry. Her professional career continued by acting in a movie called “Doostam” (Friends) directed by Abdollah Eskandari. The film, however, was not released in movie theaters due to complications with the authorities regarding the story and morals of the film.

After the departure of the Dutch striker Jurgen Lokadia from the Persepolis team, the directors of this club thought of … END_OF_DOCUMENT_TOKEN_TO_BE_REPLACED

On this special cover, apart from Golshifteh Farahani and Zaramira Brahimi, ten other famous faces have supported  protesting women, and … END_OF_DOCUMENT_TOKEN_TO_BE_REPLACED

Rafaela Santos is the sister of one of the most prominent and famous footballers in the world, but apart from … END_OF_DOCUMENT_TOKEN_TO_BE_REPLACED

Anashid Hosseini was born on January 24, 1992 in Ahvaz. His family moved very soon, a year after his birth. … END_OF_DOCUMENT_TOKEN_TO_BE_REPLACED

Neda Agha-Soltan (23 January 1983 – 20 June 2009) was an Iranian student of philosophy, who was participating in the … END_OF_DOCUMENT_TOKEN_TO_BE_REPLACED