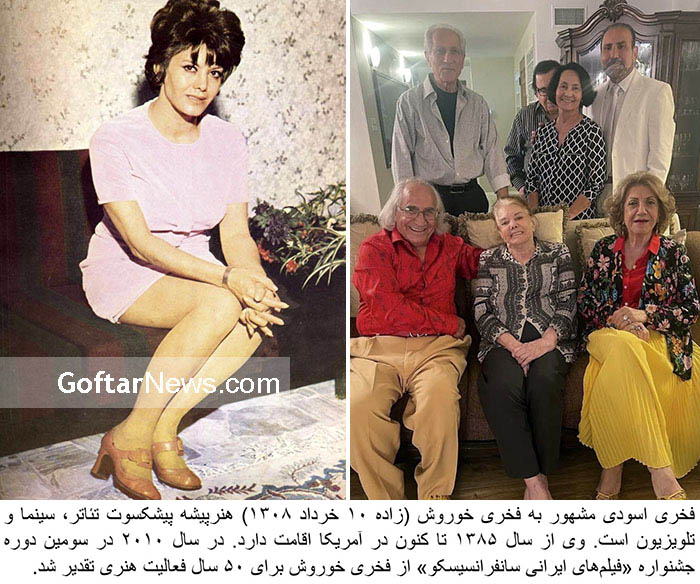 Fakhri Khorvash (born 31 May 1929) is a stage and film actress and director. She received the best actress award at the Sepas Film Festival in 1971 for her performance in the film Mr. Naive. Khorvash attended university intending to train as a doctor. However, she became a teacher, at which point she began performing in theatre. In 1948, her role in the play Dirty Hands (by Jean-Paul Sartre) was acclaimed and she was encouraged to also look at the cinema. Although she performed in the theatre and in cinema in parallel, she was not keen to switch to the silver screen completely in her earlier years.

While the hijab monitoring machine and suppression of women’s clothing have returned to the streets after a few months, the … END_OF_DOCUMENT_TOKEN_TO_BE_REPLACED

Cardboard imam refers to the set of cardboard replicas made of Seyyed Ruhollah Khomeini, which were first used in the … END_OF_DOCUMENT_TOKEN_TO_BE_REPLACED

After the departure of the Dutch striker Jurgen Lokadia from the Persepolis team, the directors of this club thought of … END_OF_DOCUMENT_TOKEN_TO_BE_REPLACED

On this special cover, apart from Golshifteh Farahani and Zaramira Brahimi, ten other famous faces have supported  protesting women, and … END_OF_DOCUMENT_TOKEN_TO_BE_REPLACED