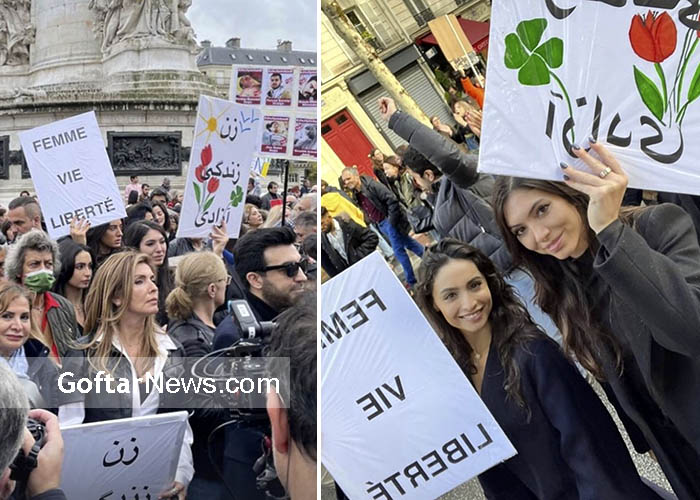 Yasmine Pahlavi is the wife of Reza Pahlavi, the last crown prince of the former Imperial State. She worked for ten years as a staff attorney for Children’s Law Center in Washington, DC, representing the rights of at-risk and underprivileged youth. She was also the co-founder and a director of the Foundation for the Children. Founded in 1991, the purpose of the Foundation is to provide health care services to children or children of origin regardless of race, color, creed, religious or political affiliation. She resigned her leadership role and any affiliation with the Foundation in February 2014. In November 2018, she announced that she had breast cancer.
Mahsa Amini, 22, was with her brother at a train station when she was stopped by the ‘morality police’. She was accused of not complying with the country’s hijab rules. She was detained, and three days later she was dead.

Shiva Balochi, the actress in the series Nurses, wrote: As the smallest member of the Muslim community, the hijab has … END_OF_DOCUMENT_TOKEN_TO_BE_REPLACED

Shohreh Mousavi, one of the directors of the Badran Company, who defrauded over 9,000 billion tomans from 300,000 people by … END_OF_DOCUMENT_TOKEN_TO_BE_REPLACED

“Evil and passion work with him.” Open the heart valves. “Its night song can be heard all over the world.” … END_OF_DOCUMENT_TOKEN_TO_BE_REPLACED

The old actress Shaheen has died.Mahintaj Moghul Kayser, known as Shaheen, a cinematic actor and an old singer, has passed … END_OF_DOCUMENT_TOKEN_TO_BE_REPLACED