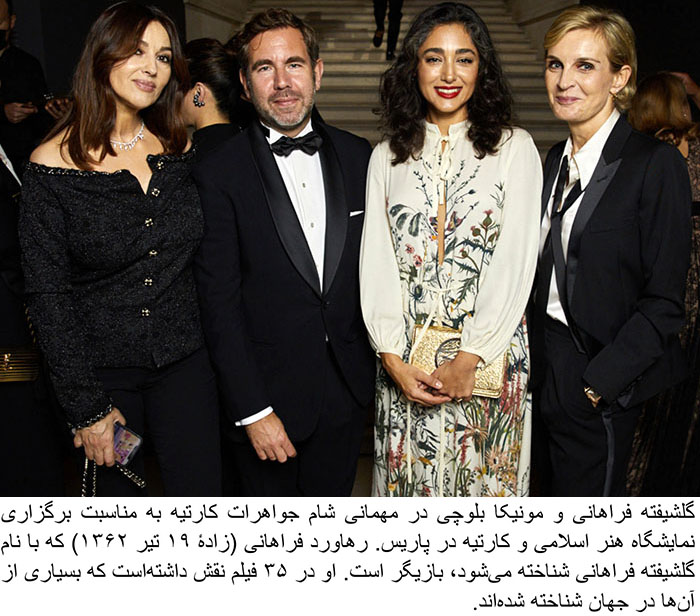 Rahavard Farahani (born 10 July 1983), is an actress. She has appeared in over 30 films, many of which have received international recognition. She was nominated for the Most Promising Actress Award for The Patience Stone at the 2014 Cesar Awards in France, and won the Best Actress Award for Boutique from the 26th Nantes Three Continents Festival (France). In recent years, she has had prominent roles in movies by well-known and international directors, including Asghar Farhadi, Bahman Ghobadi, Rasoul Mollagholipour, Jim Jarmusch, Ridley Scott, Joachim Rønning and Espen Sandberg. She starred in the drama About Elly, which won Best Picture at the 2009 Tribeca Film Festival and a Silver Bear at the Berlin International Film Festival. Due to her appearance in the Hollywood movie Body of Lies, seen by authorities as a collaboration with American propaganda and violating law by appearing without hijab, she has not been allowed to return and work in Iran since 2009 and has since resided in France.

The Sharif University of Technology is a public research university. It is widely considered as the nation’s leading institution for … END_OF_DOCUMENT_TOKEN_TO_BE_REPLACED

Successful artists don’t frame things around “not enough.” There is never enough time, not enough money, not enough confidence, not … END_OF_DOCUMENT_TOKEN_TO_BE_REPLACED

Yasmine Pahlavi is the wife of Reza Pahlavi, the last crown prince of the former Imperial State. She worked for … END_OF_DOCUMENT_TOKEN_TO_BE_REPLACED

Ali Daei started his football career with Esteghlal Ardabil. He joined the Tehran taxi team after being admitted to Sharif … END_OF_DOCUMENT_TOKEN_TO_BE_REPLACED