Meet the country singer “Ann Claire Pahlavi” in the U.S. 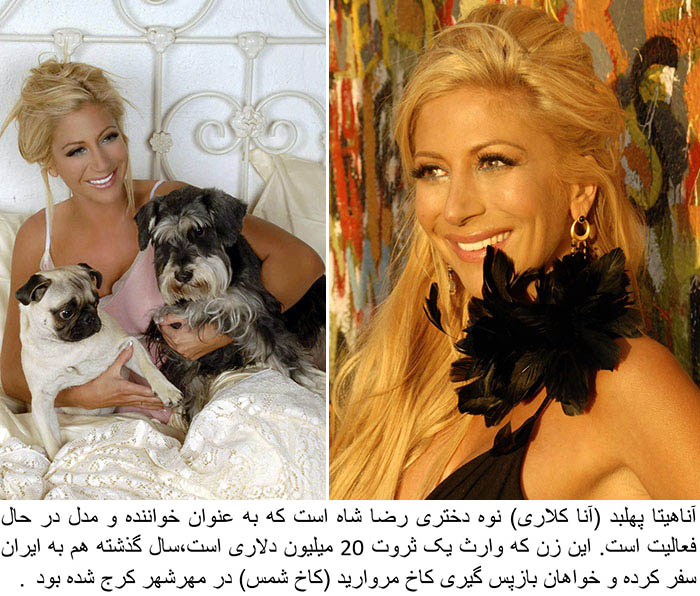 Country singer of descent, brought up in the UK and moved to Los Angeles to pursue her career. Granddaughter of princess Shams of Iran’s Pahlavi Dynasty. The elder daughter of Reza Shah by his second wife Taj-ol-Moluk, Shams Pahlavi was born in , 28th, Oct. 1917. There is not much information about her childhood and adolescence but the memoirs of Ashraf Pahlavi shows that unlike her sister, she was not interested in politics and spent her time mostly on her personal affairs and interests and felt more comfortable in the role of a traditional housewife. She accepted the presidency of the Red Sun and Lion society only to keep her public prestige. She also presided over the Iranian Women’s Circle which was formed by Reza Shah to encourage the removal of veils.

After the departure of the Dutch striker Jurgen Lokadia from the Persepolis team, the directors of this club thought of … END_OF_DOCUMENT_TOKEN_TO_BE_REPLACED

On this special cover, apart from Golshifteh Farahani and Zaramira Brahimi, ten other famous faces have supported  protesting women, and … END_OF_DOCUMENT_TOKEN_TO_BE_REPLACED

Rafaela Santos is the sister of one of the most prominent and famous footballers in the world, but apart from … END_OF_DOCUMENT_TOKEN_TO_BE_REPLACED

Anashid Hosseini was born on January 24, 1992 in Ahvaz. His family moved very soon, a year after his birth. … END_OF_DOCUMENT_TOKEN_TO_BE_REPLACED

Neda Agha-Soltan (23 January 1983 – 20 June 2009) was an Iranian student of philosophy, who was participating in the … END_OF_DOCUMENT_TOKEN_TO_BE_REPLACED