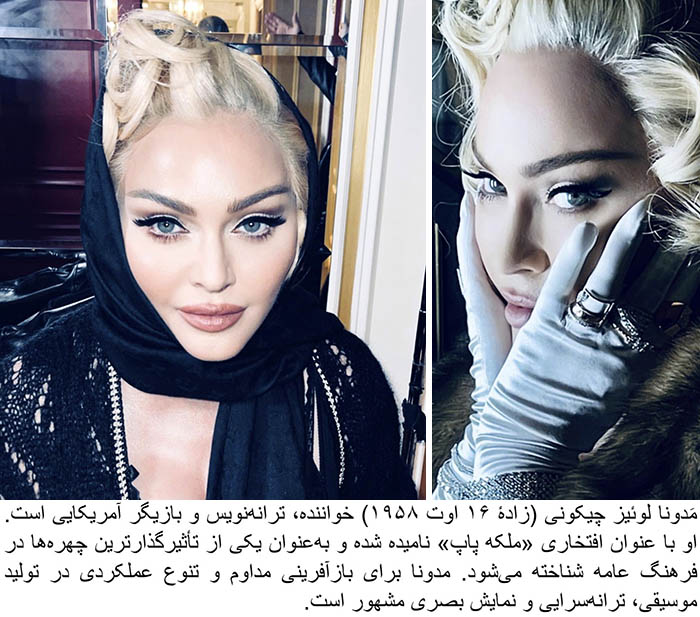 Madonna Louise Ciccone ( born August 16, 1958) is an American singer-songwriter and actress. She is one of the most influential figures in popular culture, and has often been referred to as the “Queen of Pop”. Madonna is noted for her continual reinvention and versatility in music production, songwriting, and visual presentation. She is also known for pushing the boundaries of artistic expression in mainstream music while maintaining control over every aspect of her career. Her works, which incorporate social, political, sexual, and religious themes, have generated both controversy and critical acclaim.

Mahlagha Jaberi attends the Opening Night Gala screening of “What’s Love Got To Do With It?” at the Red Sea … END_OF_DOCUMENT_TOKEN_TO_BE_REPLACED

Shiva Balochi, the actress in the series Nurses, wrote: As the smallest member of the Muslim community, the hijab has … END_OF_DOCUMENT_TOKEN_TO_BE_REPLACED

Shohreh Mousavi, one of the directors of the Badran Company, who defrauded over 9,000 billion tomans from 300,000 people by … END_OF_DOCUMENT_TOKEN_TO_BE_REPLACED

“Evil and passion work with him.” Open the heart valves. “Its night song can be heard all over the world.” … END_OF_DOCUMENT_TOKEN_TO_BE_REPLACED