Fatemeh Givi Khalkhali daughter of the M. Khalkhali in Netherlands 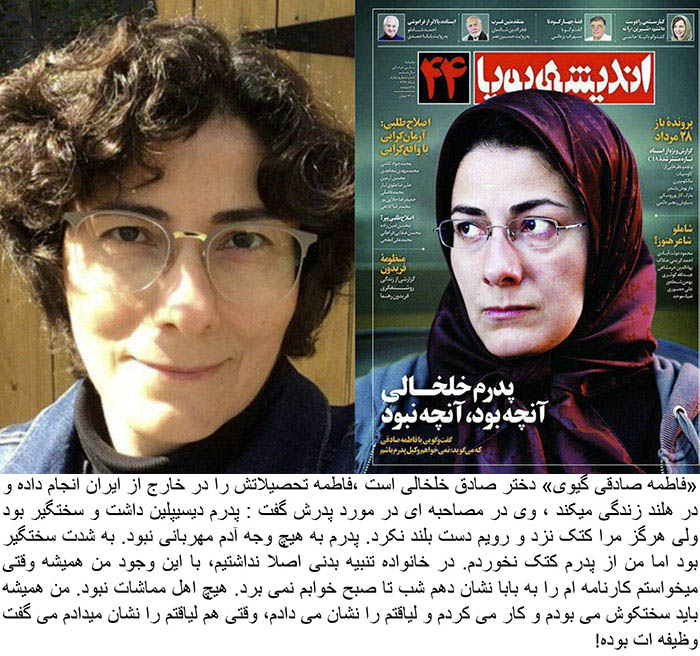 Mohammed Sadeq Givi Khalkhali (27 July 1926 – 26 November 2003) was an Shia cleric who is said to have “brought to his job as Chief Justice of the revolutionary courts a relish for summary execution” that earned him a reputation as “hanging judge”. A farmer’s son from Azeri origins was born in Givi, Azerbaijani S.S.R., U.S.S.R. (now in Azerbaijan Republic).He is also reported to have born in Kivi, Khalkhal, in the Khalkhal County, (ergo his name). Khalkhali has been described as “a small, rotund man with a pointed beard, kindly smile, and a high-pitched giggle.”

While the hijab monitoring machine and suppression of women’s clothing have returned to the streets after a few months, the … END_OF_DOCUMENT_TOKEN_TO_BE_REPLACED

Cardboard imam refers to the set of cardboard replicas made of Seyyed Ruhollah Khomeini, which were first used in the … END_OF_DOCUMENT_TOKEN_TO_BE_REPLACED

After the departure of the Dutch striker Jurgen Lokadia from the Persepolis team, the directors of this club thought of … END_OF_DOCUMENT_TOKEN_TO_BE_REPLACED

On this special cover, apart from Golshifteh Farahani and Zaramira Brahimi, ten other famous faces have supported  protesting women, and … END_OF_DOCUMENT_TOKEN_TO_BE_REPLACED