51th birthday of the Actress “Mahtab Keramati” in homeland 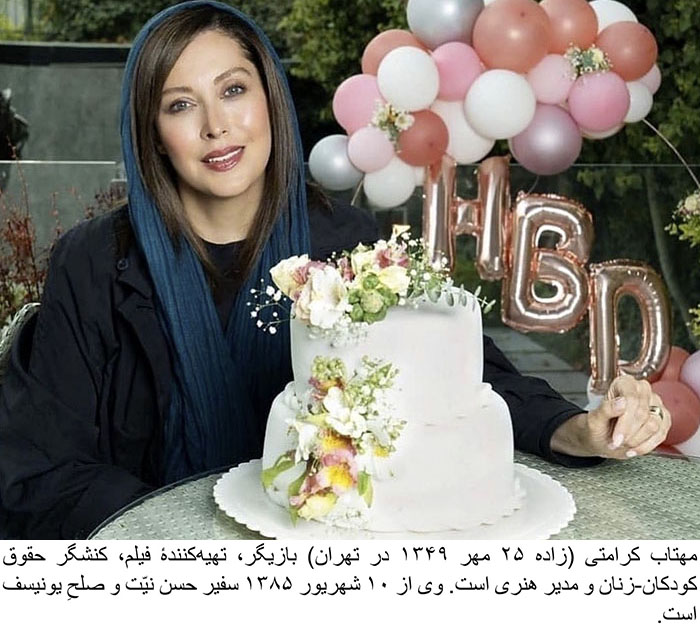 Mahtab Keramati (born 17 October 1970) is an actress. In August 2006, she was appointed as UNICEF Goodwill Ambassador.After the earthquake of Bam City which occurred on 26th December 2003, she approached philanthropy and charity work and on 30th December she was one of the artists partaking in a charity meeting for quake-stricken people of Bam.From 2013, releasing prisoners-sentenced-to-nemesis, have become one of the charity work she does and she has put some efforts in collecting blood money and getting the next of kin’s satisfaction. In this respectT Shahab Moradi has been one of her companions.

While the hijab monitoring machine and suppression of women’s clothing have returned to the streets after a few months, the … END_OF_DOCUMENT_TOKEN_TO_BE_REPLACED

Cardboard imam refers to the set of cardboard replicas made of Seyyed Ruhollah Khomeini, which were first used in the … END_OF_DOCUMENT_TOKEN_TO_BE_REPLACED

After the departure of the Dutch striker Jurgen Lokadia from the Persepolis team, the directors of this club thought of … END_OF_DOCUMENT_TOKEN_TO_BE_REPLACED

On this special cover, apart from Golshifteh Farahani and Zaramira Brahimi, ten other famous faces have supported  protesting women, and … END_OF_DOCUMENT_TOKEN_TO_BE_REPLACED