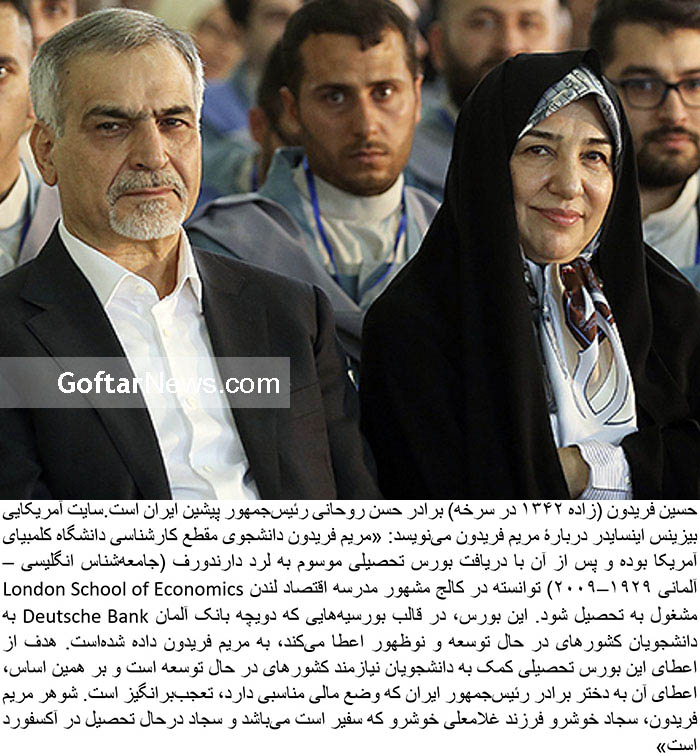 Hossein Fereydoun (born in 1957) is a politician. Fereydoun is the brother and aide to President Hassan Rouhani, described as his “eyes and ears” in the negotiations leading to the Joint Comprehensive Plan of Action. He was responsible for Ayatollah Khomeini’s security when he returned to Iran in 1979. He served as the district governor of Karaj and Nishapur. Fereydoun was later appointed as ambassador to Malaysia and held the office for eight years before joining the delegation to the United Nations.

Shiva Balochi, the actress in the series Nurses, wrote: As the smallest member of the Muslim community, the hijab has … END_OF_DOCUMENT_TOKEN_TO_BE_REPLACED

Shohreh Mousavi, one of the directors of the Badran Company, who defrauded over 9,000 billion tomans from 300,000 people by … END_OF_DOCUMENT_TOKEN_TO_BE_REPLACED

“Evil and passion work with him.” Open the heart valves. “Its night song can be heard all over the world.” … END_OF_DOCUMENT_TOKEN_TO_BE_REPLACED

The old actress Shaheen has died.Mahintaj Moghul Kayser, known as Shaheen, a cinematic actor and an old singer, has passed … END_OF_DOCUMENT_TOKEN_TO_BE_REPLACED