The young people who were sentenced to death in the courts of oppression and oppression of the Islamic Republic! Series A 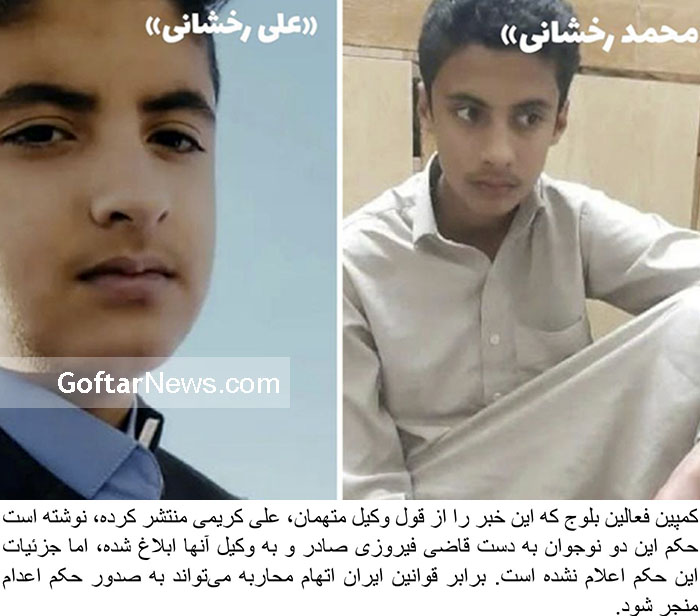 Mapin of Baloch activists announced on Thursday, the 10th of Azar, that Muharebeh had been issued for Mohammad and Ali Rakhshani Azad, two Baloch teenagers. Zahedan Criminal Court has notified the lawyers of these 15- and 16-year-old brothers, but the details have not been announced yet. Mohammad and Ali, who were arrested in front of their house on the 9th of Mehr, have not been able to meet or talk to their families on the phone. According to their family, Mohammad has a seizure disorder and was under the supervision of a doctor before his arrest. According to the Islamic Penal Code, the verdict of moharebeh can lead to death. According to Atena Daemi, a civil activist, at least 15 Baloch prisoners have been executed in the last 15 days alone. In total, at least 136 Baloch citizens have been executed since the beginning of 2022.

After the departure of the Dutch striker Jurgen Lokadia from the Persepolis team, the directors of this club thought of … END_OF_DOCUMENT_TOKEN_TO_BE_REPLACED

On this special cover, apart from Golshifteh Farahani and Zaramira Brahimi, ten other famous faces have supported  protesting women, and … END_OF_DOCUMENT_TOKEN_TO_BE_REPLACED

Rafaela Santos is the sister of one of the most prominent and famous footballers in the world, but apart from … END_OF_DOCUMENT_TOKEN_TO_BE_REPLACED

Anashid Hosseini was born on January 24, 1992 in Ahvaz. His family moved very soon, a year after his birth. … END_OF_DOCUMENT_TOKEN_TO_BE_REPLACED

Neda Agha-Soltan (23 January 1983 – 20 June 2009) was an Iranian student of philosophy, who was participating in the … END_OF_DOCUMENT_TOKEN_TO_BE_REPLACED