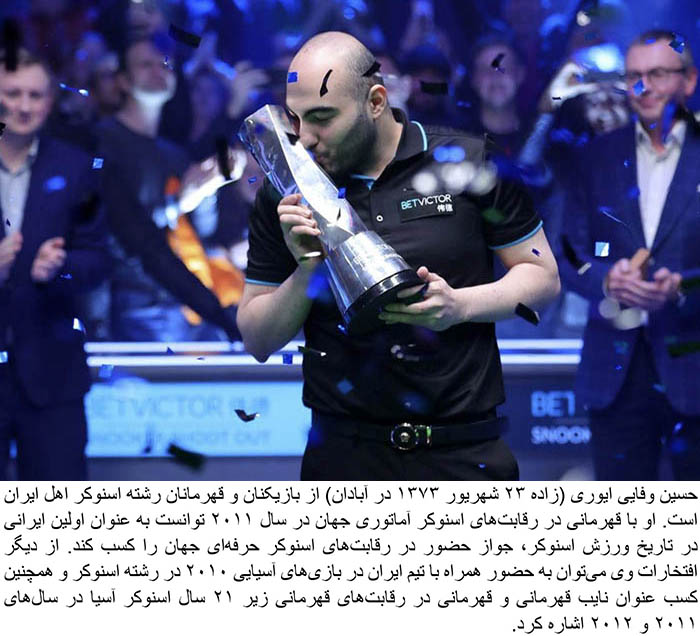 Hossein Vafaei (born 15 October 1994) is an professional snooker player. He is the first professional player. His attempts to travel to the United Kingdom to qualify for the major tournaments on the snooker calendar were denied due to visa problems, but he gained a UK visa in February 2015. He won his first professional title at the 2022 Snooker Shoot Out, beating Mark Williams. He dedicated this victory to his grandmother who died a few days before the tournament.Vafaei enjoyed wins over Rod Lawler, Zak Surety, Sanderson Lam and Scott Donaldson at the Northern Ireland Open to reach his first ranking event quarter-final, where he lost 5–3 to Mark King. He also had a good run at the Welsh Open as he beat Lam, Christopher Keogan and Ali Carter to advance to the fourth round and he was defeated 4–1 by Judd Trump.

After the departure of the Dutch striker Jurgen Lokadia from the Persepolis team, the directors of this club thought of … END_OF_DOCUMENT_TOKEN_TO_BE_REPLACED

On this special cover, apart from Golshifteh Farahani and Zaramira Brahimi, ten other famous faces have supported  protesting women, and … END_OF_DOCUMENT_TOKEN_TO_BE_REPLACED

Rafaela Santos is the sister of one of the most prominent and famous footballers in the world, but apart from … END_OF_DOCUMENT_TOKEN_TO_BE_REPLACED

Anashid Hosseini was born on January 24, 1992 in Ahvaz. His family moved very soon, a year after his birth. … END_OF_DOCUMENT_TOKEN_TO_BE_REPLACED

Neda Agha-Soltan (23 January 1983 – 20 June 2009) was an Iranian student of philosophy, who was participating in the … END_OF_DOCUMENT_TOKEN_TO_BE_REPLACED