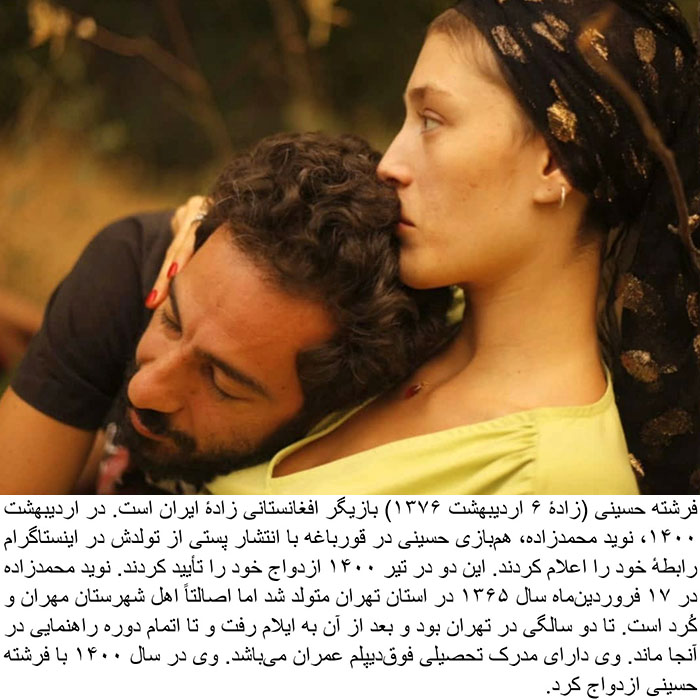 Navid Mammadzadeh ( born 6 April 1986) is an actor. He is best known for his role as Mohsen in Life and a Day (2016). Mohammadzadeh was born on April 6, 1986. He is originally a Persian and Kurd mix from Mehran in Ilam province. At the age of two, he moved to Ilam and stayed there until he graduated from school. He has an associate degree in civil engineering. On 19 October 2020, Mohammadzadeh tested positive for COVID-19. On July 19, 2021, he announced his marriage to Fereshteh Hosseini via a post on his official Instagram account. Fereshteh Hosseini (born 26 April 1997) is an actress. She is known for acting in Rona, Azim’s Mother, Parting, and The Frog series. In 2020, rumors began circulating about a relationship between Hosseini and Navid Mohammadzadeh. In April 2021, Mohammadzadeh confirmed the rumors by publishing a post on Instagram. The couple married in July 2021.

While the hijab monitoring machine and suppression of women’s clothing have returned to the streets after a few months, the … END_OF_DOCUMENT_TOKEN_TO_BE_REPLACED

Cardboard imam refers to the set of cardboard replicas made of Seyyed Ruhollah Khomeini, which were first used in the … END_OF_DOCUMENT_TOKEN_TO_BE_REPLACED

After the departure of the Dutch striker Jurgen Lokadia from the Persepolis team, the directors of this club thought of … END_OF_DOCUMENT_TOKEN_TO_BE_REPLACED

On this special cover, apart from Golshifteh Farahani and Zaramira Brahimi, ten other famous faces have supported  protesting women, and … END_OF_DOCUMENT_TOKEN_TO_BE_REPLACED