The journalist “Jason Rezaian” and family in the U.S. 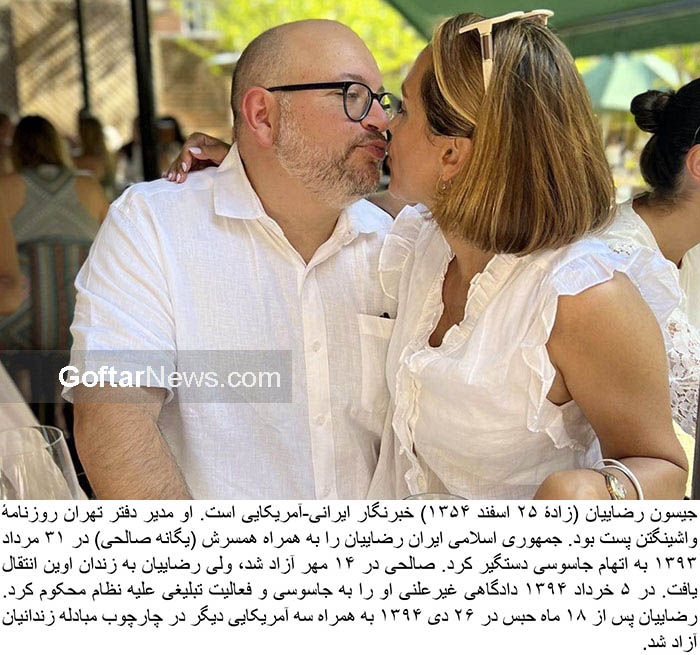 Authorities arrested Rezaian and his wife, Yeganeh Salehi, and took the couple into custody, accusing them of espionage. While Salehi – also a journalist – was released on October 6, Rezaian remained in custody at Evin Prison, a detention center known for housing political prisoners and intellectuals. After nine months, it was made public on April 20, 2015, that authorities had indicted him on four charges, including espionage and “propaganda against the establishment”. His trial began on May 26, 2015. His conviction was announced on October 11, 2015. On November 22, 2015, officials said he had been sentenced to a prison term, the length of which was not disclosed. It was announced that he had been released.

Mahlagha Jaberi attends the Opening Night Gala screening of “What’s Love Got To Do With It?” at the Red Sea … END_OF_DOCUMENT_TOKEN_TO_BE_REPLACED

Shiva Balochi, the actress in the series Nurses, wrote: As the smallest member of the Muslim community, the hijab has … END_OF_DOCUMENT_TOKEN_TO_BE_REPLACED

Shohreh Mousavi, one of the directors of the Badran Company, who defrauded over 9,000 billion tomans from 300,000 people by … END_OF_DOCUMENT_TOKEN_TO_BE_REPLACED

“Evil and passion work with him.” Open the heart valves. “Its night song can be heard all over the world.” … END_OF_DOCUMENT_TOKEN_TO_BE_REPLACED