The former TV Presenter “Azade Namdari” Memorial in the capital 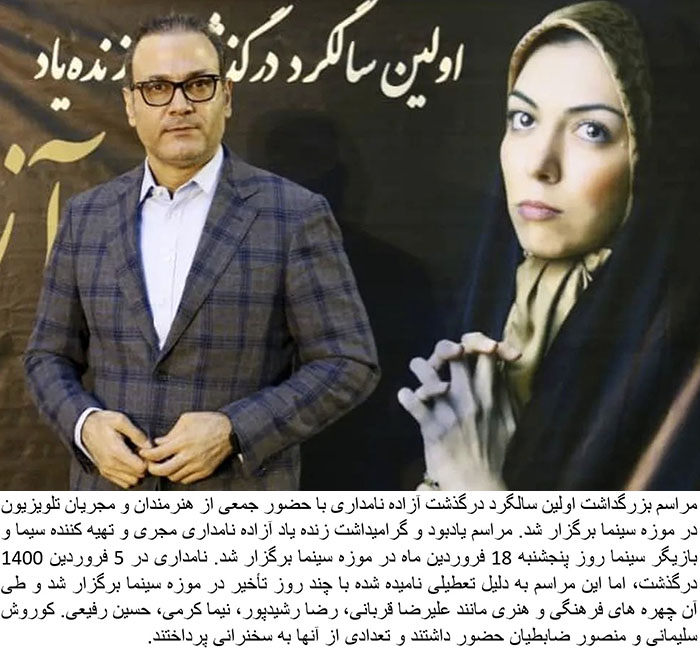 Azade Namdari (November 1984 – 26 March 2021) was an actress and television presenter. A video emerged showing Namdari drinking beer without hijab during her vacation in Switzerland. The event drew a backlash on social media as she advocated black chador and compulsory dress code. Azadeh Namdari died at the age of 36. According to news outlets, her body was discovered 24 hours after her death in her apartment in the Saadatabad area in western. Mehr News Agency quoted an “informed source” as saying that the cause of death was suicide.

Yasmine Pahlavi is the wife of Reza Pahlavi, the last crown prince of the former Imperial State. She worked for … END_OF_DOCUMENT_TOKEN_TO_BE_REPLACED

Ali Daei started his football career with Esteghlal Ardabil. He joined the Tehran taxi team after being admitted to Sharif … END_OF_DOCUMENT_TOKEN_TO_BE_REPLACED

In recent days, it has been observed that the government has used teenagers and students in military uniforms and equipment … END_OF_DOCUMENT_TOKEN_TO_BE_REPLACED

Mohammad Reza Golzar was born on April 1, 1356. He is an actor, singer, and composer. He graduated from Azad … END_OF_DOCUMENT_TOKEN_TO_BE_REPLACED