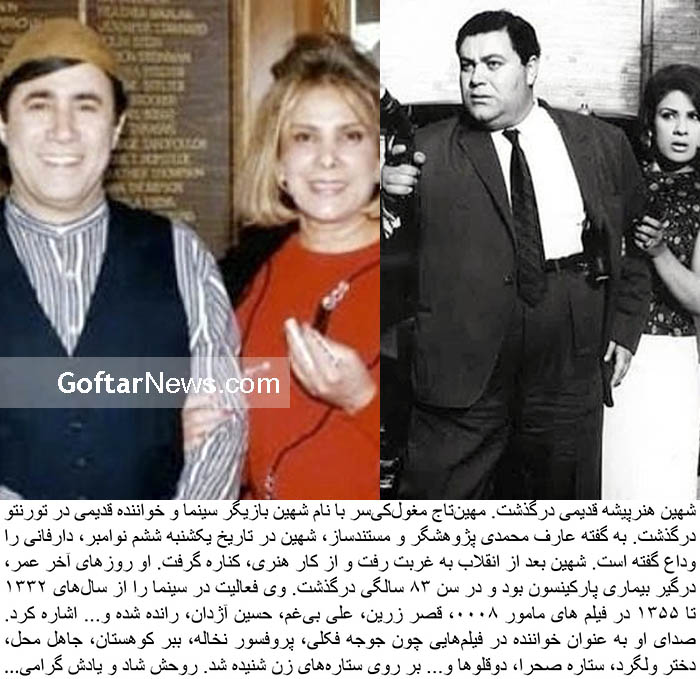 The old actress Shaheen has died.Mahintaj Moghul Kayser, known as Shaheen, a cinematic actor and an old singer, has passed away in Toronto.According to Arif Mohammadi, a researcher and documentary maker, Shaheen said goodbye to Darfani on Sunday, November 6.After the revolution, Shahin went abroad and retired from artistic work. In the last days of his life, he suffered from Parkinson’s disease and died at the age of 83. She mentioned his work in cinema from 1332 to 1355 in the films Mamor 0008, Qasr Zareen, Ali Begham, Hossein Azhdan, Driven, and…Her voice as a singer was heard in films such as Joche Fekli, Professor Nakhale, Tiger of the Mountain, Jahl Mahal, Dokhtar Gard, Star of the Sahara, Twins, etc., on female stars. a great blessing and a great memory…

Mahlagha Jaberi attends the Opening Night Gala screening of “What’s Love Got To Do With It?” at the Red Sea … END_OF_DOCUMENT_TOKEN_TO_BE_REPLACED

Shiva Balochi, the actress in the series Nurses, wrote: As the smallest member of the Muslim community, the hijab has … END_OF_DOCUMENT_TOKEN_TO_BE_REPLACED

Shohreh Mousavi, one of the directors of the Badran Company, who defrauded over 9,000 billion tomans from 300,000 people by … END_OF_DOCUMENT_TOKEN_TO_BE_REPLACED

“Evil and passion work with him.” Open the heart valves. “Its night song can be heard all over the world.” … END_OF_DOCUMENT_TOKEN_TO_BE_REPLACED