The Female German Football Player Sara Doorsoun: “A lot of girls have to fight” 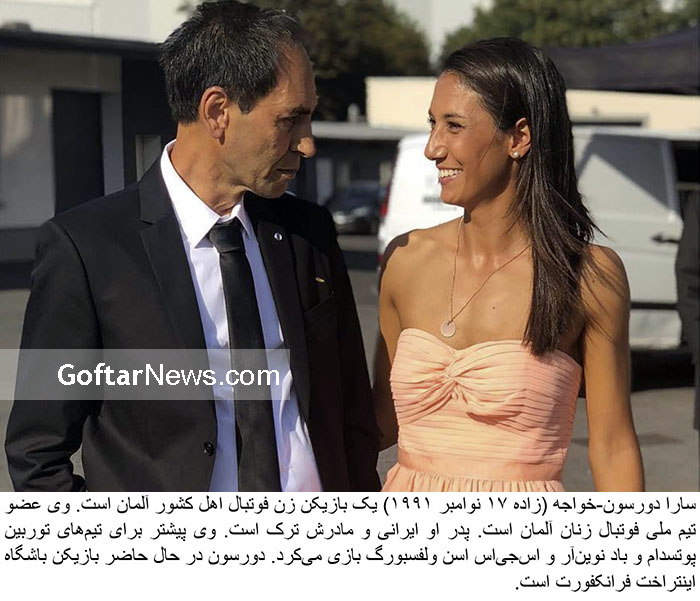 Sara Doorsoun-Khajeh (born 17 November 1991) is a German footballer who plays as a midfielder and defender for Eintracht Frankfurt and the Germany national team. She previously played for Wattenscheid 09, Bad Neuenahr, Turbine Potsdam, SGS Essen, VfL Wolfsburg and Eintracht Frankfurt.Having represented Germany from the under-15 level up, Doorsoun made her debut for the senior Germany women’s national football team in 2016 during a 1–0 win over Hungary.

Mahlagha Jaberi attends the Opening Night Gala screening of “What’s Love Got To Do With It?” at the Red Sea … END_OF_DOCUMENT_TOKEN_TO_BE_REPLACED

Shiva Balochi, the actress in the series Nurses, wrote: As the smallest member of the Muslim community, the hijab has … END_OF_DOCUMENT_TOKEN_TO_BE_REPLACED

Shohreh Mousavi, one of the directors of the Badran Company, who defrauded over 9,000 billion tomans from 300,000 people by … END_OF_DOCUMENT_TOKEN_TO_BE_REPLACED

“Evil and passion work with him.” Open the heart valves. “Its night song can be heard all over the world.” … END_OF_DOCUMENT_TOKEN_TO_BE_REPLACED