The American government gave visas to the mobs and leaders who attacked the British and Saudi embassies! 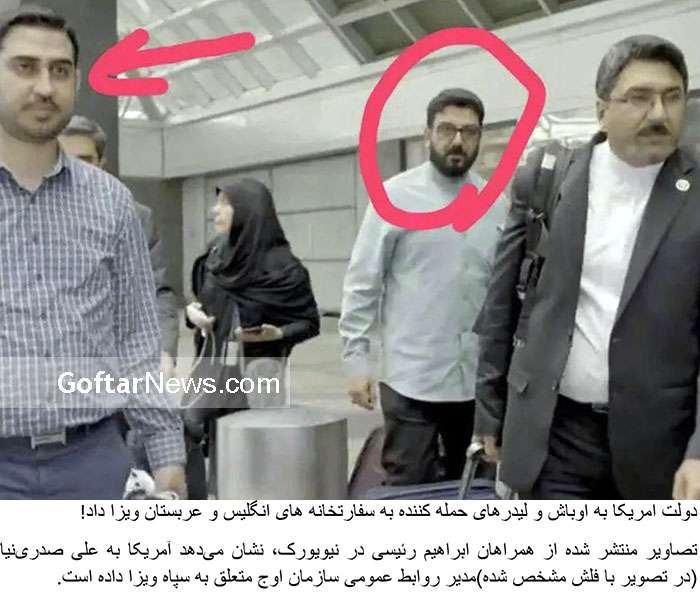 The published pictures of Ebrahim Raeesi’s companions in New York show that the US has given a visa to Ali Sadriniya (marked with an arrow in the picture), the director of public relations of the Ouj organization belonging to the IRGC. Raisi further said the US had trampled the 2015 nuclear agreement between Iran and world powers. He also vowed to obtain justice for the US assassination of Qassem Soleimani, a top general killed by a drone strike in 2020.

While the hijab monitoring machine and suppression of women’s clothing have returned to the streets after a few months, the … END_OF_DOCUMENT_TOKEN_TO_BE_REPLACED

Cardboard imam refers to the set of cardboard replicas made of Seyyed Ruhollah Khomeini, which were first used in the … END_OF_DOCUMENT_TOKEN_TO_BE_REPLACED

After the departure of the Dutch striker Jurgen Lokadia from the Persepolis team, the directors of this club thought of … END_OF_DOCUMENT_TOKEN_TO_BE_REPLACED

On this special cover, apart from Golshifteh Farahani and Zaramira Brahimi, ten other famous faces have supported  protesting women, and … END_OF_DOCUMENT_TOKEN_TO_BE_REPLACED