The Actress “Hadis Fooladvand” and “Rambod Shekarabi” opened up their divorce 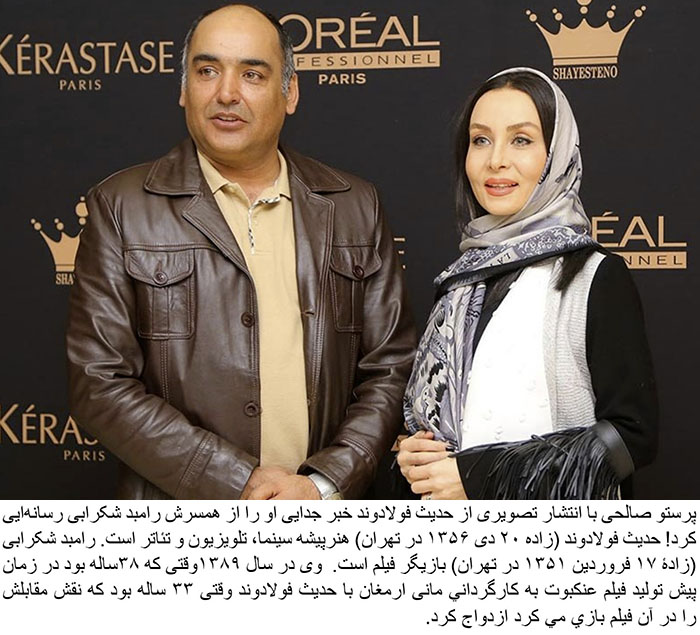 Hadis fooladvand is an actress. She is a graduate of Architecture Directing. She is married to Rambod Shekar Aabi, who is also an actor. She started her acting career as a child. At the age of 12, she was trained by Golab Adineh and went on stage to play “Golhaye Doosti”. Her first appearance in a movie was in Dasthaye Aloode, directed by Siroos Alvand in 1999. Rambod Shekarabi is an actor who was born in 1972. “Transit” directed by Ali Sajadi Hosseini is his first activity. From his activities, “Mercedes” by Masoud Kimiaei, “Voice of Endearment” by Reza Shalchi and “Grey” directed by Mehrdad Mirfalah can be named.

The Sharif University of Technology is a public research university. It is widely considered as the nation’s leading institution for … END_OF_DOCUMENT_TOKEN_TO_BE_REPLACED

Successful artists don’t frame things around “not enough.” There is never enough time, not enough money, not enough confidence, not … END_OF_DOCUMENT_TOKEN_TO_BE_REPLACED

Yasmine Pahlavi is the wife of Reza Pahlavi, the last crown prince of the former Imperial State. She worked for … END_OF_DOCUMENT_TOKEN_TO_BE_REPLACED

Ali Daei started his football career with Esteghlal Ardabil. He joined the Tehran taxi team after being admitted to Sharif … END_OF_DOCUMENT_TOKEN_TO_BE_REPLACED