The Actor “Danial Hakimi” with family in the picture 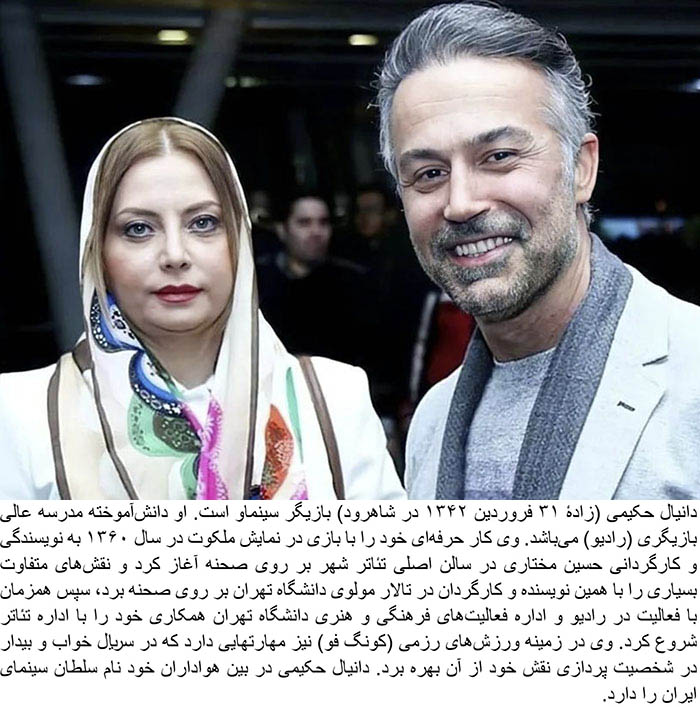 Danial Hakimi (March 6, 1963) is a film, stage, TV, and radio actor/director. Hakimi was born in Shahrud. He graduated from Radio acting school, and studied Acting with Hamid Samandarian. He started his professional acting career by playing as Oceanus, in Prometheus Bound tragedy and performed in many notable roles on stage. He went on to film work, beginning with 2001 Inventor, followed by What’s Up? and My Eyes for You. Hakimi, had successful performances in many Television series including Asleep & Awake, Love province, Paternal House, Passenger, Evil Mind, and The Gradual Death of a Dream. In 2007 he won the 24th Fajr International Theater Festival award for best performance in the leading role, for the role of Bahman Ahang in the Melody of the Rainy City drama, written by Akbar Radi.

After the departure of the Dutch striker Jurgen Lokadia from the Persepolis team, the directors of this club thought of … END_OF_DOCUMENT_TOKEN_TO_BE_REPLACED

On this special cover, apart from Golshifteh Farahani and Zaramira Brahimi, ten other famous faces have supported  protesting women, and … END_OF_DOCUMENT_TOKEN_TO_BE_REPLACED

Rafaela Santos is the sister of one of the most prominent and famous footballers in the world, but apart from … END_OF_DOCUMENT_TOKEN_TO_BE_REPLACED

Anashid Hosseini was born on January 24, 1992 in Ahvaz. His family moved very soon, a year after his birth. … END_OF_DOCUMENT_TOKEN_TO_BE_REPLACED

Neda Agha-Soltan (23 January 1983 – 20 June 2009) was an Iranian student of philosophy, who was participating in the … END_OF_DOCUMENT_TOKEN_TO_BE_REPLACED