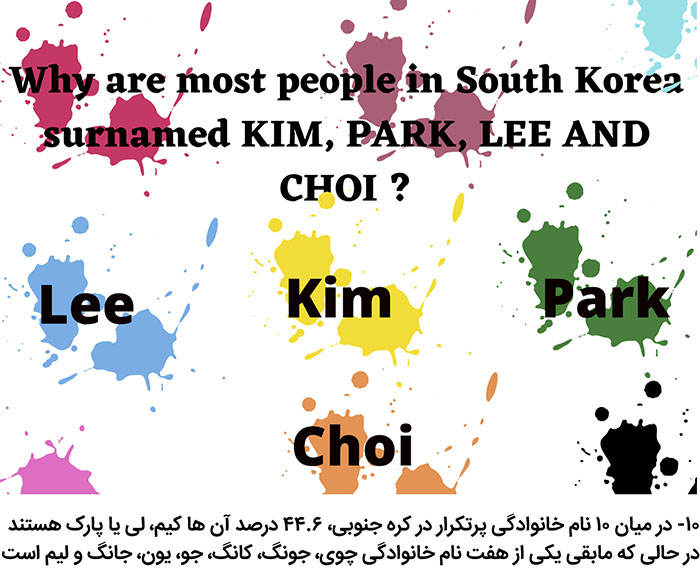 Korean family names are the names of the clan to which the family belongs. In 2000, there were around 280 family names in use, and the family name of nearly half the population is either Kim, Lee, or Park. Between 2000 and 2015, there was an influx of more than 4,800 new surnames due to foreign-origin families and naturalization of citizens. In total, there are 5,582 different surnames, though not all of them have the corresponding characters. Despite all these new surnames, a majority of the Korean population has the same ones. Kim is used by almost 21% of the population, Lee by 14.8%, Park by 8.5%, Choi by 4.7%, and Jung by 4.4% of the Koreans.

Mahlagha Jaberi attends the Opening Night Gala screening of “What’s Love Got To Do With It?” at the Red Sea … END_OF_DOCUMENT_TOKEN_TO_BE_REPLACED

Shiva Balochi, the actress in the series Nurses, wrote: As the smallest member of the Muslim community, the hijab has … END_OF_DOCUMENT_TOKEN_TO_BE_REPLACED

Shohreh Mousavi, one of the directors of the Badran Company, who defrauded over 9,000 billion tomans from 300,000 people by … END_OF_DOCUMENT_TOKEN_TO_BE_REPLACED

“Evil and passion work with him.” Open the heart valves. “Its night song can be heard all over the world.” … END_OF_DOCUMENT_TOKEN_TO_BE_REPLACED