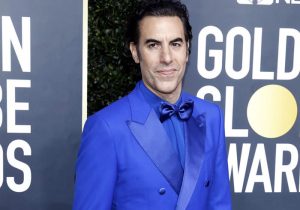 Cancel culture has simply gone too far. Sacha Baron Cohen has officially canceled his beloved — but controversial — satirical characters. Sunday night at the MTV Movie & TV Awards, the 49-year-old filmmaker was honored with the Comedic Genius gong, bringing his characters Ali G, Borat Sagdiyev, Bruno Gehard and Admiral General Aladeen along for the occasion — and making the executive decision to end his categorically un-PC schticks. Following an introduction by Seth Rogen, who applauded the British satirist for “reveal[ing] the truth about the human condition by utilizing brilliant wit and sharp, insightful commentary,” Cohen and the gang accepted — and fought over — the award via a pre-recorded speech. “Thank you Prince Harry,” the Kazakh broadcaster began. “I’m very excited to be on this brand-new music television channel.” “I’m very happy to be accepting this cup of gold teeth instead of Sacha Baron Cohen and will put it in our national museum along with other treasure we have confiscated from Jews,” Borat continued.

“High five!” Then, chavvish celebrity correspondent Ali G entered the frame. “We should be accepting this award, not you. I was the original gangster. The OG,” he interrupted. The well-acquainted pair briefly caught up over Borat’s return in the acclaimed “Subsequent Moviefilm,” as Ali G complained that it was “wack.” “The only good bit was in that hotel room when that fly honey in the blue dress was about to be boned by Rudi Guli-Andrews.

Then you come in and ruin it,” he said. Then, Cohen himself arrived to take what is rightfully his, but not before dragging Ali G for being a “white suburban kid who’s coo-opting black culture.” “I created you,” said Cohen. “You created me? That is typical white privilege innit?” Ali G responded before exiting the frame. “Thank you MTV; to the millions of fans out there who voted for me, I salute you. This is yours, I’d be nothing without you. I’m so humbled by this. I’m just a human being creating complex nuanced characters — sophisticated tools to expose …” Cohen ekes out a few lines of gratitude before Bruno appears, wearing a pink unitard with one ghastly appendage hanging from the front: “Did somebody say they want me to expose my sophisticated tool?” “You’re ruining this,” said Cohen. “You can’t say that stuff unless you’re exposing homophobia with real people.”

After the departure of the Dutch striker Jurgen Lokadia from the Persepolis team, the directors of this club thought of … END_OF_DOCUMENT_TOKEN_TO_BE_REPLACED

On this special cover, apart from Golshifteh Farahani and Zaramira Brahimi, ten other famous faces have supported  protesting women, and … END_OF_DOCUMENT_TOKEN_TO_BE_REPLACED

Rafaela Santos is the sister of one of the most prominent and famous footballers in the world, but apart from … END_OF_DOCUMENT_TOKEN_TO_BE_REPLACED

Anashid Hosseini was born on January 24, 1992 in Ahvaz. His family moved very soon, a year after his birth. … END_OF_DOCUMENT_TOKEN_TO_BE_REPLACED

Neda Agha-Soltan (23 January 1983 – 20 June 2009) was an Iranian student of philosophy, who was participating in the … END_OF_DOCUMENT_TOKEN_TO_BE_REPLACED