Reza Ghoochannejhad organise birthday party for his son in the Netherlands! 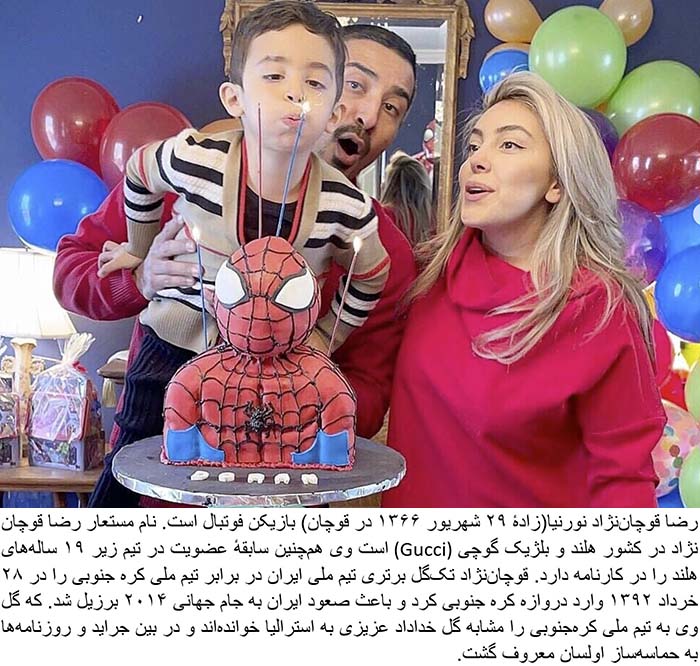 Reza Ghoochannejhad Nournia (born 20 September 1987) is a professional footballer who last played for Dutch side PEC Zwolle as a forward. He is also known as Gucci in Belgium and Netherlands, having played for Dutch national youth teams and the national team. Ghoochannejhad represented at the 2014 and 2018 FIFA World Cups and the 2015 AFC Asian Cup. He is the eighth-highest all-time goalscorer for with 17 international goals.

Yasmine Pahlavi is the wife of Reza Pahlavi, the last crown prince of the former Imperial State. She worked for … END_OF_DOCUMENT_TOKEN_TO_BE_REPLACED

Ali Daei started his football career with Esteghlal Ardabil. He joined the Tehran taxi team after being admitted to Sharif … END_OF_DOCUMENT_TOKEN_TO_BE_REPLACED

In recent days, it has been observed that the government has used teenagers and students in military uniforms and equipment … END_OF_DOCUMENT_TOKEN_TO_BE_REPLACED

Mohammad Reza Golzar was born on April 1, 1356. He is an actor, singer, and composer. He graduated from Azad … END_OF_DOCUMENT_TOKEN_TO_BE_REPLACED