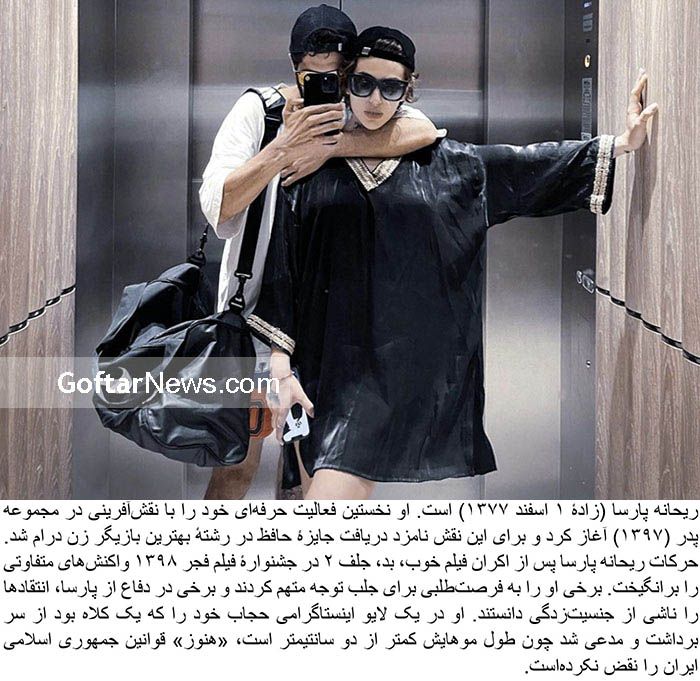 Reyhaneh Parsa (born 23 February 1999) is an actress. Reyhaneh Parsa was born on the first of Esfand 1999 in Tehran. She graduated from the conservatory with a degree in drama. At the age of 21, she divorced her roommate, Mehdi Koushki, and less than a year later. In April 2009, Parsa was the guest of Khandvaneh program. The program in which she participated with Sina Mehrad became a record in terms of reflection on social networks and the number of viewers of Telubion. Parsa’s first appearance in a television interview on the Iranium program took place in August 2016.

Mahlagha Jaberi attends the Opening Night Gala screening of “What’s Love Got To Do With It?” at the Red Sea … END_OF_DOCUMENT_TOKEN_TO_BE_REPLACED

Shiva Balochi, the actress in the series Nurses, wrote: As the smallest member of the Muslim community, the hijab has … END_OF_DOCUMENT_TOKEN_TO_BE_REPLACED

Shohreh Mousavi, one of the directors of the Badran Company, who defrauded over 9,000 billion tomans from 300,000 people by … END_OF_DOCUMENT_TOKEN_TO_BE_REPLACED

“Evil and passion work with him.” Open the heart valves. “Its night song can be heard all over the world.” … END_OF_DOCUMENT_TOKEN_TO_BE_REPLACED