Rare Photos of the Houshang Ebtehaj and family 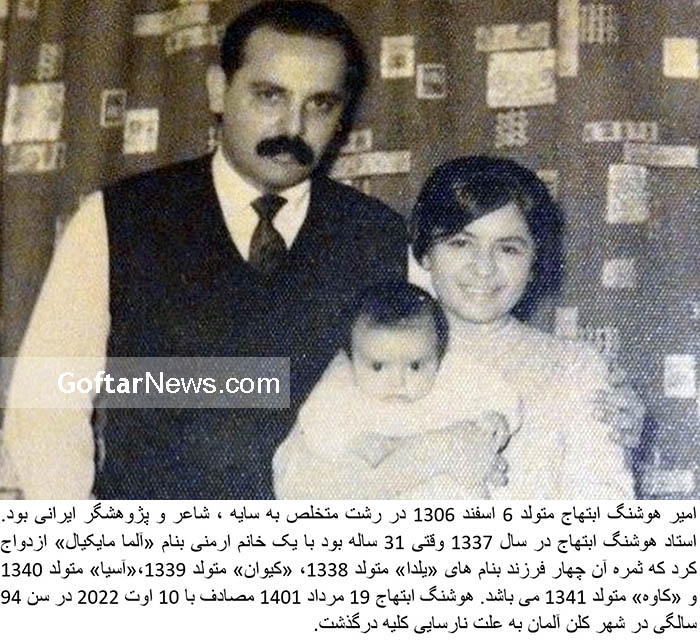 Ebtehaj was born 25 February 1928 in Rasht in a prominent Baha’i family and had his primary schooling there before moving. His first book of poetry, with an introduction by eminent poet Mehdi Hamidi Shirazi, was published when he was 19 years old. During Iran’s open period following World War II, Sayeh got involved in various literary circles and contributed to various literary magazines such as Sokhan, Kavian, Sadaf, Maslehat, and others. Unlike many other literary figures of the time who got deeply involved in politics and left-leaning activities, Sayeh stayed true to his social and political consciousness but refrained from deeper involvement. He was employed at the National Cement Company for 22 years while continuing his literary activities. Later he was invited by the National Radio to produce the traditional music program “Golhaye Taze” and “Golchin Hafte.”

While the hijab monitoring machine and suppression of women’s clothing have returned to the streets after a few months, the … END_OF_DOCUMENT_TOKEN_TO_BE_REPLACED

Cardboard imam refers to the set of cardboard replicas made of Seyyed Ruhollah Khomeini, which were first used in the … END_OF_DOCUMENT_TOKEN_TO_BE_REPLACED

After the departure of the Dutch striker Jurgen Lokadia from the Persepolis team, the directors of this club thought of … END_OF_DOCUMENT_TOKEN_TO_BE_REPLACED

On this special cover, apart from Golshifteh Farahani and Zaramira Brahimi, ten other famous faces have supported  protesting women, and … END_OF_DOCUMENT_TOKEN_TO_BE_REPLACED