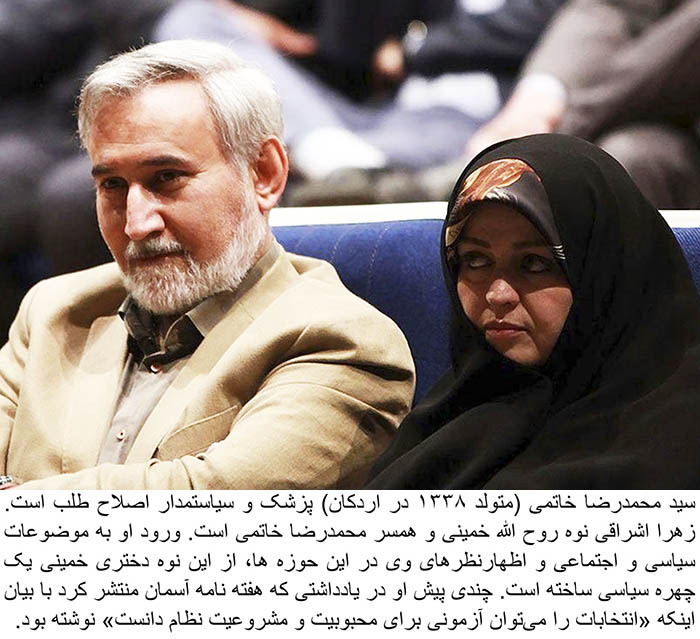 Khatami was the first Secretary-General of the Participation Front, the largest reformist party. He is now a member of the central council of the party. He is also the former deputy speaker of the parliament. He entered politics in 1997 after his brother’s victory and was appointed deputy minister of health. He was elected in March 2000 for the sixth term of the Islamic Republic’s parliament’s election as the first representative of Tehran with 1,794,365 votes from the people. He has also acted as the manager in charge of the now-banned reformist daily Mosharekat. Sometimes described as “ultraliberal” in his views, he was “disqualified from running for any office by the Guardian Council.”

Mahlagha Jaberi attends the Opening Night Gala screening of “What’s Love Got To Do With It?” at the Red Sea … END_OF_DOCUMENT_TOKEN_TO_BE_REPLACED

Shiva Balochi, the actress in the series Nurses, wrote: As the smallest member of the Muslim community, the hijab has … END_OF_DOCUMENT_TOKEN_TO_BE_REPLACED

Shohreh Mousavi, one of the directors of the Badran Company, who defrauded over 9,000 billion tomans from 300,000 people by … END_OF_DOCUMENT_TOKEN_TO_BE_REPLACED

“Evil and passion work with him.” Open the heart valves. “Its night song can be heard all over the world.” … END_OF_DOCUMENT_TOKEN_TO_BE_REPLACED