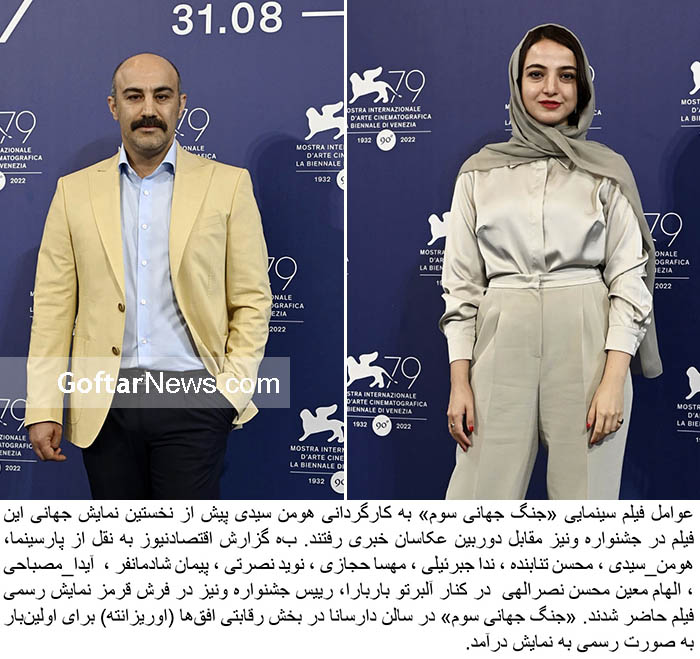 Houman Seyyedi, Tannaz Tabatabaei, Shadi Karamroudi and director Arian Vazirdaftari attends the photocall for “Bi Roya” at the 79th Venice International Film Festival in Venice, Italy. Houman Seyyedi (born November 29, 1980) is an actor, director, screenwriter and editor. He has received various accolades, including six Crystal Simorghs–making him the only director to have three wins in Special Jury Prize category–two Hafez Awards, five Film Critics and Writers Association Awards, a NETPAC Award and an Asian New Talent Award. His sixth film, World War III (2022) competed for the Orizzonti Award at the 79th Venice International Film Festival. Mohsen Tanabandeh (born April 15, 1975) is an actor, director and screenwriter. He is best known for his role as Naghi Mamouli in Capital (2011–2021). He has received various accolades, including three Crystal Simorgh and four Hafez Awards.

While the hijab monitoring machine and suppression of women’s clothing have returned to the streets after a few months, the … END_OF_DOCUMENT_TOKEN_TO_BE_REPLACED

Cardboard imam refers to the set of cardboard replicas made of Seyyed Ruhollah Khomeini, which were first used in the … END_OF_DOCUMENT_TOKEN_TO_BE_REPLACED

After the departure of the Dutch striker Jurgen Lokadia from the Persepolis team, the directors of this club thought of … END_OF_DOCUMENT_TOKEN_TO_BE_REPLACED

On this special cover, apart from Golshifteh Farahani and Zaramira Brahimi, ten other famous faces have supported  protesting women, and … END_OF_DOCUMENT_TOKEN_TO_BE_REPLACED