Photos of Reza Sadeghi in Canada 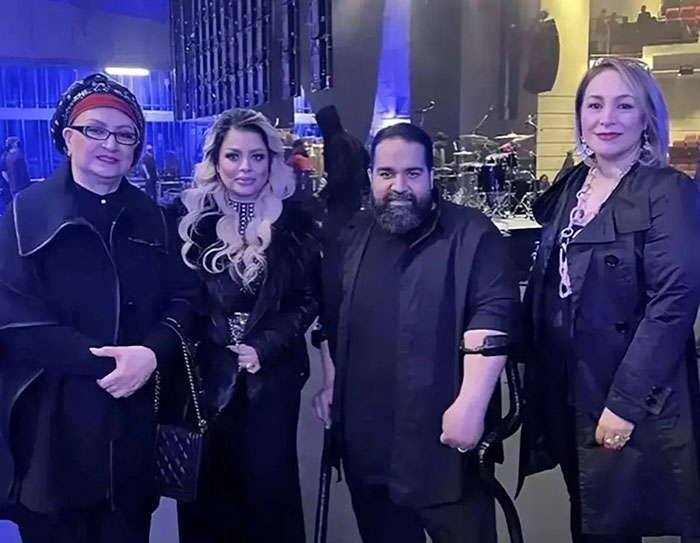 Born in 1979, Reza Sadeghi was raised in Bandar Abbas, Hormozgan, and then moved to Tehran at the age of 5. He was a close friend of former domestic footballer Ali Ansarian, who he befriended in primary school. Reza Sadeghi’s first spouse died in a car crash in which he was left paralyzed and was required to use an assistive cane for the rest of his life, including during concerts, where he usually rests besides a cane. Since the crash, Sadeghi has decided to appear in public in fully black clothing. Due to this, he is known as Siah Poosh (lit. who wears black, or man in black). Many of his compositions are based around the color black, including his best-known song Meshki Rang-e Eshghe (Black is the Color of Love).

Shiva Balochi, the actress in the series Nurses, wrote: As the smallest member of the Muslim community, the hijab has … END_OF_DOCUMENT_TOKEN_TO_BE_REPLACED

Shohreh Mousavi, one of the directors of the Badran Company, who defrauded over 9,000 billion tomans from 300,000 people by … END_OF_DOCUMENT_TOKEN_TO_BE_REPLACED

“Evil and passion work with him.” Open the heart valves. “Its night song can be heard all over the world.” … END_OF_DOCUMENT_TOKEN_TO_BE_REPLACED

The old actress Shaheen has died.Mahintaj Moghul Kayser, known as Shaheen, a cinematic actor and an old singer, has passed … END_OF_DOCUMENT_TOKEN_TO_BE_REPLACED