Photos of NILOUFAR BAHADORIFAR that was arrested on July 1, 2021 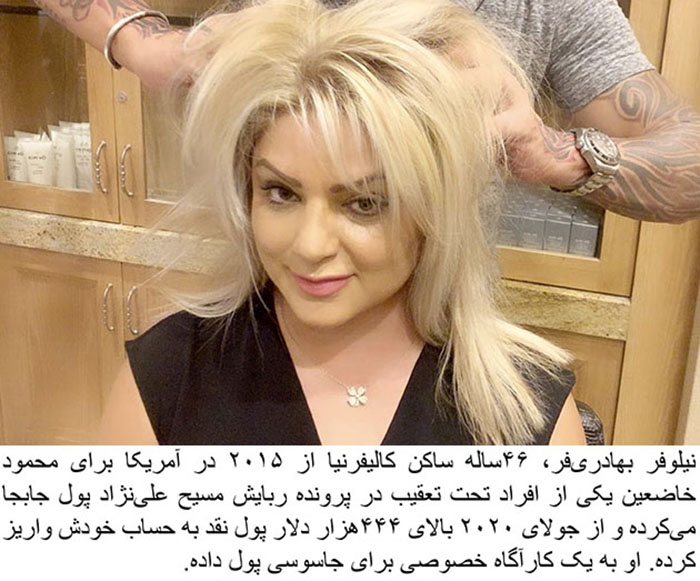 The indictment also named a female accomplice: Niloufar Bahadorifar (aka Nellie Bahadorifar), age 46, who allegedly “provided financial services” to the plotters while living in California. She was arrested on July 1 and arraigned before a federal judge on July 8. Bahadorifar was charged with violating U.S. sanctions on Iran, money laundering, and bank and wire fraud. The four other “remain at large,” the U.S. Attorney’s Office for the Southern District of New York said in a statement on July 13. The Justice Department did not identify the Iranian American journalist. But Masih Alinejad – a Voice of America contractor and fierce critic of compulsory dress code – told The New York Times that she was the intended kidnapping target. Federal authorities had already moved her to a safe house several months ago, The Wall Street Journal reported.

While the hijab monitoring machine and suppression of women’s clothing have returned to the streets after a few months, the … END_OF_DOCUMENT_TOKEN_TO_BE_REPLACED

Cardboard imam refers to the set of cardboard replicas made of Seyyed Ruhollah Khomeini, which were first used in the … END_OF_DOCUMENT_TOKEN_TO_BE_REPLACED

After the departure of the Dutch striker Jurgen Lokadia from the Persepolis team, the directors of this club thought of … END_OF_DOCUMENT_TOKEN_TO_BE_REPLACED

On this special cover, apart from Golshifteh Farahani and Zaramira Brahimi, ten other famous faces have supported  protesting women, and … END_OF_DOCUMENT_TOKEN_TO_BE_REPLACED