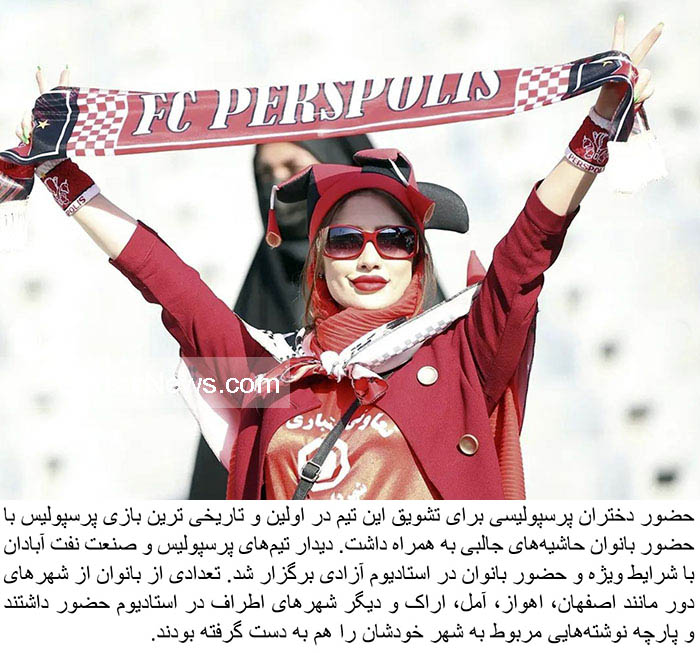 The game between Persepolis and Sanat Naft Abadan will take place in Azadi Stadium under special circumstances and with the presence of women.In the following, you will read some of the sidelines of the women’s presence at the Azadi Stadium to cheer on the Persepolis team: An hour before the start of the game, the doors of the stadium were opened to the women who were standing outside Azadi, and about 3 to 4 thousand women from Persepolis entered the stadium without tickets. A number of women from distant cities such as Isfahan, Ahvaz, Amol, Arak and other nearby cities were present in the stadium, and they had written clothes related to their cities.

While the hijab monitoring machine and suppression of women’s clothing have returned to the streets after a few months, the … END_OF_DOCUMENT_TOKEN_TO_BE_REPLACED

Cardboard imam refers to the set of cardboard replicas made of Seyyed Ruhollah Khomeini, which were first used in the … END_OF_DOCUMENT_TOKEN_TO_BE_REPLACED

After the departure of the Dutch striker Jurgen Lokadia from the Persepolis team, the directors of this club thought of … END_OF_DOCUMENT_TOKEN_TO_BE_REPLACED

On this special cover, apart from Golshifteh Farahani and Zaramira Brahimi, ten other famous faces have supported  protesting women, and … END_OF_DOCUMENT_TOKEN_TO_BE_REPLACED