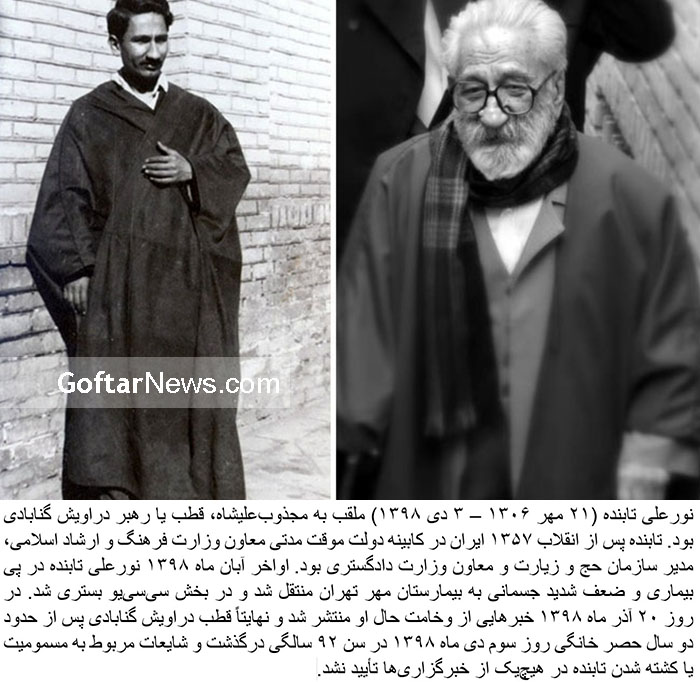 Noor-Ali Tabandeh (October 1927 – 24 December 2019) was the spiritual leader or Qutb of the Ni’matullah (Sultan Ali Shahi) Gonabadi Order in, which is the largest Sufi order. He was born in Beydokht, Gonabad, and died in Mehr Hospital on 24 December 2019 after two years of house arrest. During his time within the Ministry of Justice and working as an attorney, Tabandeh made considerable efforts to support the human and social rights of, for which he was imprisoned and suffered numerous persecutions. Since the 2018 crackdown of the regime on followers of the Gonabadi order, he was held under house arrest by the authorities.

Mahlagha Jaberi attends the Opening Night Gala screening of “What’s Love Got To Do With It?” at the Red Sea … END_OF_DOCUMENT_TOKEN_TO_BE_REPLACED

Shiva Balochi, the actress in the series Nurses, wrote: As the smallest member of the Muslim community, the hijab has … END_OF_DOCUMENT_TOKEN_TO_BE_REPLACED

Shohreh Mousavi, one of the directors of the Badran Company, who defrauded over 9,000 billion tomans from 300,000 people by … END_OF_DOCUMENT_TOKEN_TO_BE_REPLACED

“Evil and passion work with him.” Open the heart valves. “Its night song can be heard all over the world.” … END_OF_DOCUMENT_TOKEN_TO_BE_REPLACED