Movie Stars Who Are Ready to Do Anything for a Role 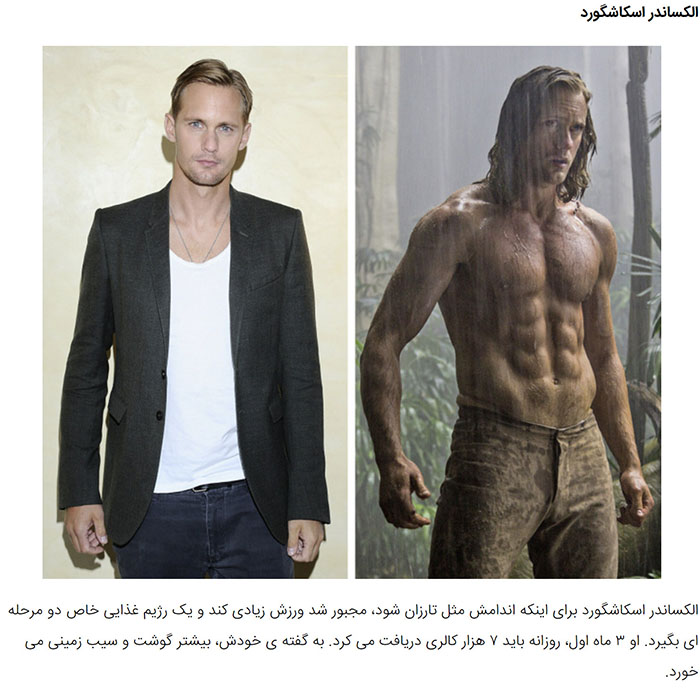 To build a body like Tarzan’s, the actor had to work out a lot and stick to a special diet, which consisted of 2 stages. For the first 3 months, Alexander had to consume 7,000 calories a day. According to the actor, he ate mostly meat and potatoes. The second stage of the diet was more strict and didn’t include fast carbs. Alexander had to eat 6 small meals a day. And this drove him crazy. “I would walk around and look at my watch constantly thinking, when’s my next meal, that was the highlight of my day,” the actor revealed. 5 months later, his trainer allowed him to cheat with his meals slightly. Alexander even cried from happiness when he could finally eat what he wanted. He ordered pasta, a pizza, and tiramisu and felt like he was in heaven.

Ali Daei started his football career with Esteghlal Ardabil. He joined the Tehran taxi team after being admitted to Sharif … END_OF_DOCUMENT_TOKEN_TO_BE_REPLACED

In recent days, it has been observed that the government has used teenagers and students in military uniforms and equipment … END_OF_DOCUMENT_TOKEN_TO_BE_REPLACED

Mohammad Reza Golzar was born on April 1, 1356. He is an actor, singer, and composer. He graduated from Azad … END_OF_DOCUMENT_TOKEN_TO_BE_REPLACED

Elham Hamidi, a famous actress, was born on December 8, 1956. Her education level: Elham Hamidi graduated with a bachelor’s … END_OF_DOCUMENT_TOKEN_TO_BE_REPLACED