Meet The TV Presenter “S. Dehghanpour”, “H. Armideh” and their family in the U.S. 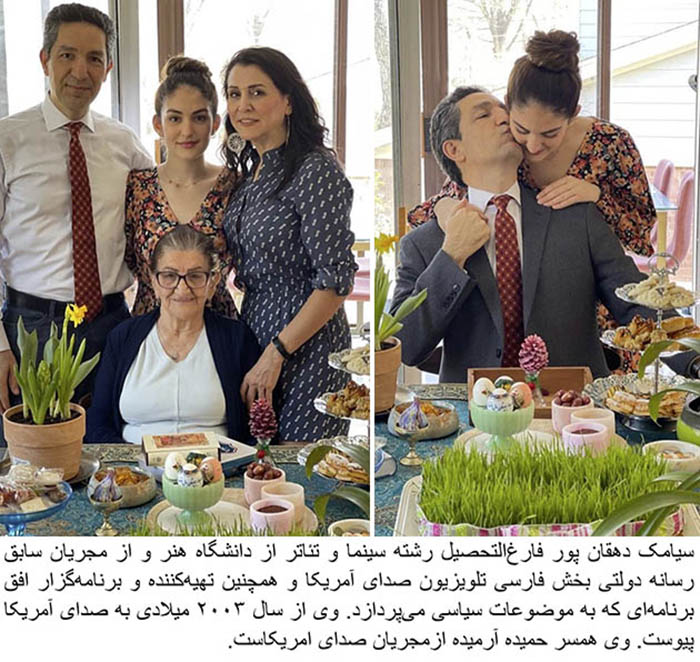 Siamak Dehghanpour has been an international broadcaster at VOA’s Persian service since 2003. Dehghanpour played a key role in the launching of VOA Persian’s television programs, serving as lead reporter and correspondent of its flagship news program. During his 18-year career at VOA, Dehghanpour has traveled extensively to cover U.S. presidential elections and major news events throughout the United States. He has interviewed many American officials, newsmakers and politicians. He was the television host and managing editor of the “Ofogh” program from 2011 to 2015. Prior to joining VOA, Dehghanpour owned a publishing business and worked for numerous publications as a production manager, managing editor, and board member. He holds a Bachelor of Arts in film directing from the Faculty of Cinema and Theater of the University of the Arts in Tehran and is currently attending American University for a Master in Fine Arts in film and media.

Mahlagha Jaberi attends the Opening Night Gala screening of “What’s Love Got To Do With It?” at the Red Sea … END_OF_DOCUMENT_TOKEN_TO_BE_REPLACED

Shiva Balochi, the actress in the series Nurses, wrote: As the smallest member of the Muslim community, the hijab has … END_OF_DOCUMENT_TOKEN_TO_BE_REPLACED

Shohreh Mousavi, one of the directors of the Badran Company, who defrauded over 9,000 billion tomans from 300,000 people by … END_OF_DOCUMENT_TOKEN_TO_BE_REPLACED

“Evil and passion work with him.” Open the heart valves. “Its night song can be heard all over the world.” … END_OF_DOCUMENT_TOKEN_TO_BE_REPLACED