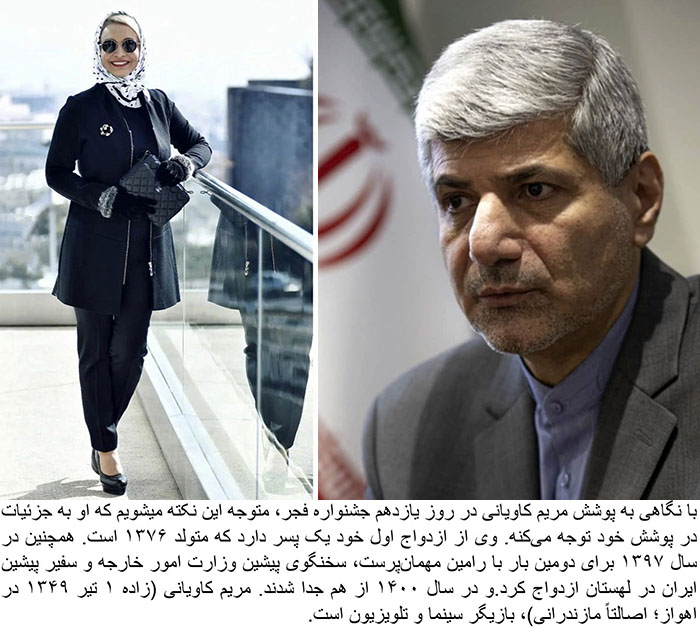 Maryam Kavyani was born in Ahvaz to Baboli parents. She lives at present. Ms Kavyani has a postgraduate degree in nursing and before entering into acting profession in 2002, worked as a professional nurse. In 2002 she played her first role in the feature film The Youthful Dream (Royā-ye Javāni), directed by Nāder Moghaddas. Since this time she has played in feature films Dexterous (Tar-dast), 2004, directed by Mohammad Ali Sadjadi, Spaghetti in Eight Minutes (Espāgeti dar Hasht Daghigheh), 2005, directed by Rāmbod Javān, Rival Wife (Havoo), 2005, directed by Alireza Dāvoudnejād, and Predicament (Makhmaseh), 2008, directed by Mohammad Ali Sadjadi. She became a national household name in after appearing in the role of Raanā in the television series She Was An Angel (Ou Yek Fereshteh Bud), directed by Alireza Afkhami, which was broadcast in 2005. In recent years Ms Kavyani has been playing major roles in mainly television series, such as The Night Way (Rāh-e Shab), directed by Dāriush Farhang, The Times of Gharib (Ruzgār-e Gharib),[2] directed by Kianoush Ayari, and The Fifth Sun (Panjomin Khorshid), directed by Alireza Afkhami. The latter, in which Ms Kavyani plays the role of Maryam, sister of Mohsen, is at present (August 2009) being broadcast by Channel 3 of IRIB.

While the hijab monitoring machine and suppression of women’s clothing have returned to the streets after a few months, the … END_OF_DOCUMENT_TOKEN_TO_BE_REPLACED

Cardboard imam refers to the set of cardboard replicas made of Seyyed Ruhollah Khomeini, which were first used in the … END_OF_DOCUMENT_TOKEN_TO_BE_REPLACED

After the departure of the Dutch striker Jurgen Lokadia from the Persepolis team, the directors of this club thought of … END_OF_DOCUMENT_TOKEN_TO_BE_REPLACED

On this special cover, apart from Golshifteh Farahani and Zaramira Brahimi, ten other famous faces have supported  protesting women, and … END_OF_DOCUMENT_TOKEN_TO_BE_REPLACED