Leyla Milani and manny khoshbin in the picture 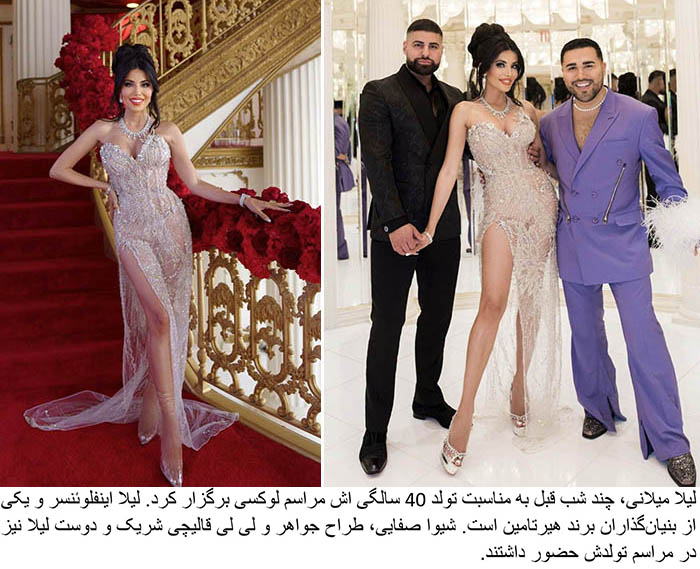 Leyla Milani Khoshbin (born April 2, 1982) is a Canadian-American model, TV host, entrepreneur and retired actress. Milani was born in Toronto to parents, and she is married to Iranian entrepreneur, real estate investor and author, super car influencer, Manuchehr (Manny) Khoshbin. Leyla has appeared in the 2005 WWE Diva Search, Deal or No Deal, Sleeper Cell, Las Vegas, Rules of Engagement, Attack of the Show!, Curb Your Enthusiasm, Entourage, Stacked, Desire, Wanted, The Tonight Show with Jay Leno, Extra, and the 2006 Lingerie Bowl. She has also appeared in the films Wrestlemaniac, Dr. Chopper. Maxim magazine features Milani and her fellow Deal or No Deal briefcase models in their online Girls of Maxim gallery.

While the hijab monitoring machine and suppression of women’s clothing have returned to the streets after a few months, the … END_OF_DOCUMENT_TOKEN_TO_BE_REPLACED

Cardboard imam refers to the set of cardboard replicas made of Seyyed Ruhollah Khomeini, which were first used in the … END_OF_DOCUMENT_TOKEN_TO_BE_REPLACED

After the departure of the Dutch striker Jurgen Lokadia from the Persepolis team, the directors of this club thought of … END_OF_DOCUMENT_TOKEN_TO_BE_REPLACED

On this special cover, apart from Golshifteh Farahani and Zaramira Brahimi, ten other famous faces have supported  protesting women, and … END_OF_DOCUMENT_TOKEN_TO_BE_REPLACED